ROCKLIN, Calif. -- I had been warned: Whitney Oaks Golf Club was the hardest course east of Sacramento.

Whitney Oaks Golf Club in Rocklin sits just half an hour from Sacramento but the stunning landscape blanketed with thousands of live oaks feels much more secluded. In addition to the trees, massive granite outcroppings accent the course. It is both a visually stunning and formidable championship layout.

But when I heard who the course architect, my reply was simple: What did you expect from a Johnny Miller design?

Whitney Oaks is a multi-faceted wonder. First, some of the topography, such as the par-5 11th, is nothing short of spectacular -- sloping land dotted by large oaks and marvelous rock outcroppings as the fairway skirts and then falls into wetlands or dry creek beds.

It's also a golf course that serves as the central feature of a large real estate development whose magnificent homes at times make you take your eyes off the golf course.

In short, there are great holes, but on some, you'll find that the proximity to backyards and pools can be distracting. And that can be a detriment, because, after all, this is a Miller course, and that means you have to pay attention.

Having played several northern California courses designed by Miller, the common features are amazing green complexes and tough greenside bunkering, to be expected from one of the best iron players in the history of golf.

Whitney Oaks G.C. came about during the mid-1990s when growth in Sacramento suburbs such as Rocklin and nearby Roseville exploded. It's a difficult walk, and the cart ride on the back nine, which has more elevation change in these oak-covered hillsides, becomes more dramatic.

It was a course designed to feature the best of golf lifestyle, and it is capable of holding a professional event. In my mind, it would be perfect for the Champions Tour. Well, "perfect" in that some of the par 4s would drive the pros crazy, but they can prepare on the full driving range and large practice green and chipping areas.

Alas, the economic downturn of the last five years didn't help the golf club, but the United Auburn Indian Community, owners of Thunder Valley Casino in nearby Lincoln, stepped in and purchased it.

A new general manager, Victor Cantu, has started the transformation, and he said he wasn't happy with the course's condition. The deal closed in early May, and by the end of the month, you could tell that the conditions were improving immediately.

"Every time we come out the course is getting better and better," said Jason McCook, a Rocklin resident who plays the course regularly.

It only will be a matter of time before the Bermuda-grass fairways -- needed to withstand the high summer heat -- will return to their original lushness, which in my eyes was the only drawback to the course's condition.

Miller's par 4s are always a test. It doesn't matter if it's the 355-yard 14th or the back-to-back devils called No. 5 and No. 6, Miller wants drives long and straight and then approach shots to proper green levels.

Whitney Oaks Golf Club has five sets of tee boxes, and from the back, this course comes up just short of 6,800 yards, yet pulls down a whopping slope rating of 141. From the 6,360-yard Gray tees, the slope is 130, and yet that seems a little low.

Here's an example of the challenges at Whitney Oaks:

The 190-yard, downhill, par-3 fourth features a guardian rock formation left of the green and a putting surface large enough to hold an ice skating competition, yet has a huge depression that creates a severe challenge on putts.

The par-4 fifth is 400-yards, long but a crossing hazard midway requires a fairway wood off the tee for a long to mid-iron approach through a closed-down opening to a long-and-narrow green with huge undulation.

The par-4 sixth tops 400 and requires a tee shot through a chute of trees and yet must avoid wetlands on the left side for an uphill approach.

Amidst all this you get wonderful moments, such as the 282-yard 10th, which is Miller's homage to the par-4 10th at Riviera Country Club. A layup to the left leaves a short iron to a raised, well bunkered green, but long hitters are encouraged to take their drives over the trees to the green.

The par-5 11th should rank as one of the best holes in northern California. A good drive must stay away from bunkers and a creek bed on the left, but the second shot must avoid over-hanging oak branches high and then large granite rocks down low. 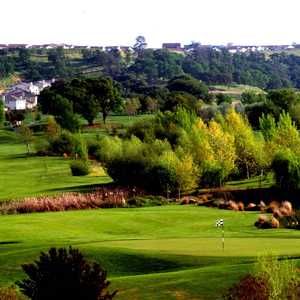