CLIO, Calif. - Lots of golf courses claim to be nature wonderlands. It's one of the most common and egregious misrepresentations in the industry (right up there with, "It's a course for all skill levels"). And it usually means as much as a Mel Gibson apology.

Shooting across the wildflowers and the lake to reach the green on No. 11 is one of Whitehawk Ranch's photo-friendly plays.
«

But there are exceptions, places where you'll dodge geese and gawk at hawks soaring overhead while you play.

You'll get all that and more at the Golf Club at Whitehawk Ranchin the shadow of the High Sierras.

In fact, Whitehawk has so much nature it's liable to mess with a city slicker's golf metabolism at first. Getting buzzed - and bitten - by enough buffalo gnats (think flies, only uglier and meaner) to stage a Pearl Harbor reenactment had this golfer less than pumped starting off the round.

"Some people really have a severe reaction to them," Plumas County Visitors Bureau Director Suzi Brakken cheerfully acknowledged of the gnat bites. "But not too many."

Thanks for the confidence boost, Suzi. What's next, a swarm of locusts that are really friendly once you get to know them?

No matter. By the turn you're liable to get caught up in Whitehawk's woods. The gnats recede (or your skin gets more country-tough) and a more pleasant face of Mother Nature shows itself, one that alternates between a forest amphitheater of towering pines and wide open horizon views.

Once you get into a round here, time takes a back seat. Stash that expensive watch in your golf bag and turn off the cell phone. Using a cell on this course would be like walking into the Academy Awards in Bermuda shorts. It just wouldn't fit.

Unless it's to snap a picture of the baby geese waddling along at No. 11. Brakken takes so many the little tykes must think they're Paris Hilton.

The geese know how to hang right - the 11th is the most impressive par 3 on the course. You're shooting across a glistening blue lake with colorful flowers and swaying plants. It's 202 yards to the flag, and if you bail out right you end up on a grassy swale that all but mocks your diminishing par hopes with a windy chuckle.

That hazard notwithstanding, Whitehawk doesn't take a hammer to high handicappers. There are some tall-grass forced carries off the tee, but nothing that'll cause more than minor-traffic-jam frustration. You can hit it around here even if you're hitting straightforward rolling shots that barely leave the ground.

The tall pines do come into play, particularly on the back nine; even the best golfer in our group found himself tromping into the woods several times, searching for wayward shots.

Just another way to get close to nature at Whitehawk Ranch. Maybe the buffalo gnats can be put to work tracking balls.

Whitehawk Ranch is a little off the beaten path but well worth the trek. With $90 twilight rates (maybe the best time to play, with the sunset views) in prime season, this is a mid-priced course you'll want to work into a Tahoe/Reno-area trip.

Most of the courses in this underrated golf region bring the scenery, but Whitehawk does it more old-school than most, without the fuss. Designer Dick Bailey didn't fall for any of the attention-grabbing celebrity-architect tricks; he lets the pines, cedars, wildflowers and streams hold center stage on this 6,927-yard par 71.

With the late afternoon sun cutting through the tall trees, it almost feels like you're playing in a different land. You are. It's a nature land. For real.

For the best accommodation choice you'll barely need to leave the course. The best choice for accommodation is the Lodge at Whitehawk Ranch (877-945-6343), which rents individual condo cabins; mine had three full bedrooms, a huge open kitchen and dead animals everywhere on the walls. It's is no place for trendspotters, just a first-rate lodging option.

If you're at Whitehawk, you're next-door to Graeagle, one of those great little towns you'd probably never stumble across if you weren't a golfer. It has six courses in an eight-mile radius, no small feat for a town with only eight residents per square mile.

Moody's Bistro & Lounge (530-587-8688), about an hour away in Truckee,
is arguably the place to eat in the entire Tahoe region. The manager comes straight from Manhattan gastronomic palace Picholine; the young chef wears T-shirts and cooks knockout sophisticated meals. Once a year Paul McCartney gets up on the small stage and does a show. It's that kind of place.

Settled in the late 1800s, the 965-acre Whitehawk Ranch property spent much of the 20th century as a working cattle ranch. 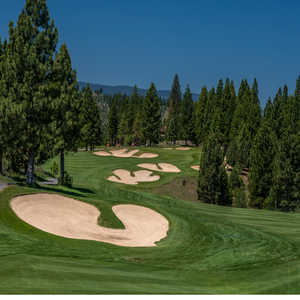 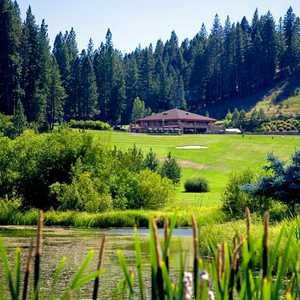 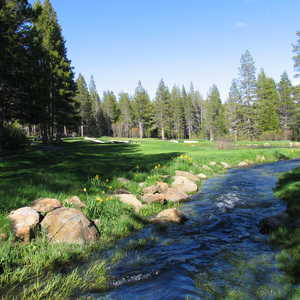