TRUCKEE, Calif. -- It looks like something out of the Bronze Age. Hulking rocks surround the green, each larger than the next, somehow seeming both random and in perfect harmony. The one right behind the flag, looming over and into a white sand bunker, is big enough to swallow that boulder that chased Indiana Jones.

It's such an arresting visual of a hole that golfers often stop back in the Coyote Moon Golf Course clubhouse to compliment the work it must have required. That 12th hole -- what kind of heavy machinery did it take?

Think again. There are limits to even modern golf-course architecture. The monster rocks at Coyote Moon date back centuries. They were here long before the first white man set foot in the California/Nevada High Sierra. They were here before golf was a sport, or even a thought.

Some much more original designer came up with these things.

Which doesn't mean that Brad Bell doesn't deserve credit for incorporating the granite outcroppings into Coyote Moon's layout. A lot of course architects might have shied away from these hulking blocks, seen them as an impediment to their vision. Bell, a former PGA Tour pro turned neophyte designer, built holes around the giants, using them to full dramatic effect.

Holes like No. 12, with its Stonehenge green. And No. 7, the par 5 where the granite makes its first appearance, startling first-timers going for the green in two. Missing right here on approach can send your ball thudding off a boulder so big it's been named (Hooligan's Rock).

"You wouldn't want to run into this thing in a dark alley," local golfer Larry Wilson quipped as he putted out on No. 7 with Hooligan's lurking over his shoulder.

This is just part of the natural wonder at Coyote Moon, arguably the best golf course you've never heard of. Oh, it got some nice word of mouth after its summer-2000 opening. But it's still a largely underrated track in an equally overshadowed region where the elevation's higher and the temperatures cooler than many West Coast golf meccas in the summer.

"We'd heard a little about it because we're from the Napa area," visiting golfer Mike Cameron said. "But one of our buddies who flew in from Denver for the trip was like, 'What's a Coyote Moon?'"

Just a course where the pine trees are towering, the up-and-downs plentiful and the houses nil. That's right, Coyote Moon is a golf course built in the 21st century without an on-site real-estate component. A round takes you weaving through the woods, with no chance of stumbling across someone's garden gnome.

The result is a course with a very different feel, where the word "scenery" is more than brochure boilerplate. Staring off the tee at No. 13 across a chasm of trees and rocks at a green that looks to be no short elevator ride down, you can't help but think Coyote Moon's been cut out of a mountain.

Coyote Moon's whole back nine is a nerve-testing wilderness for which on Boy Scout merit badge is going to prepare you. There's an annoying 601-yard, par 5 15th that climbs uphill and gives even the longest hitters with no chance to make the green in two and ordinary ones with hardly anything to shoot at period. There's a long water clear on the par-3 16th, and an inventive par-4 17th that dares and double-dares you to cut the corner on the lake.

So much for getting bored in the woods.

It tops its Nicklaus-designed neighbor, Old Greenwood Golf Course, in almost every way. And Old Greenwood is a nice course. Coyote Moon is just that good, this reviewer's second favorite among a packed selection of Lake Tahoe/Reno plays (after only the renowned Edgewood Tahoe).

Some golfers look at Coyote Moon's green fee and blanch. Play it and you'll lose any price-tag quibbles. From the first hole, a par 5 that lets you bomb away (as long as you avoid the tree in the fairway), you'll be into it. Everyone seems to be at Coyote Moon. Even the beer-cart girl. She made so many runs in her high-tech cart that you thought she was being paid by the lap. 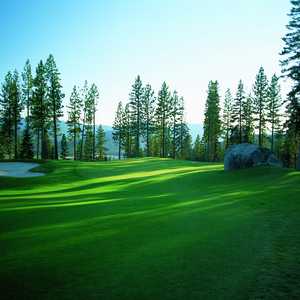 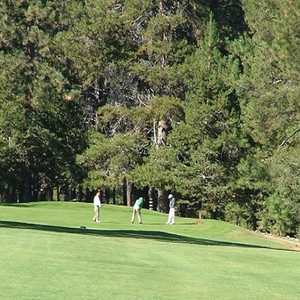 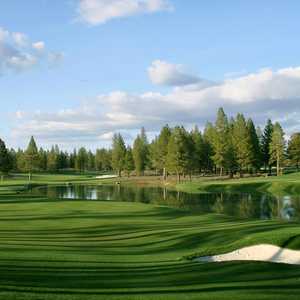