Course architect Casey O'Callaghan transformed a spectacular piece of unbridled land into a breath-taking championship layout that provides the golfer a dramatic ride up and down the roller-coaster-like terrain in the northern foothills of the Santa Ana Mountains about 50 miles west of downtown Los Angeles.

The 6,721-yard, par-72 course is located about 2.5 miles off of Interstate-15 in the area known throughout southern California as the Inland Empire, a stretch of land west of the nation's second-largest city.

Hidden Valley Golf Club opened in 1997 in what will someday be a large sub-division, but housing construction is still in the early stages. Don't worry, golf fans, there won't be any houses built on the course, preserving the natural beauty of the surroundings.

Just the trip up the winding Clubhouse Drive can get the golfing juices jumping as the course unfolds well below you.

"We are blessed (with this land)," Hoesing said. "I still can't believe when I look at some of the early pictures that someone thought this could be a golf course. This is not your average course for the price or the experience."

Golf Digest doesn't think it's average, either, awarding the course a 3 1/2-star rating in 1998. The low prices don't reflect the course's worth.

"Golf in southern California is fairly pricey," Hoesing said. "Here, you'll get a visually stimulating experience with a value for about $30 less than what you might pay somewhere else. It's an experience that's not easy to match. We're a great option that will only take about an extra 10 to 15 minute drive. It's a very stunning layout."

Hidden Valley Golf Club is owned by Illinois-based Kemper Sports Management, which operates more than 30 courses in nine states, including the prestigious Kemper Lakes Golf Course in Long Grove, Ill. Hidden Valley must certainly be one of Kemper's best.

Hundreds of massive granite boulders dot the property, some sitting in the middle of fairways, giving the course a feel much like the famous Troon North Golf Club of Scottsdale, Ariz. Some of the more formidable rock structures have earned names -- like Hat Rock or Twin Saber Rock, which blocks any approach shot from the right side of the first green. This massive outcropping inspired the course's logo.

Besides the hazard of hitting these rocks, they might hold another danger -- rattlesnakes. Signs across the course warn golfers not to stray too far off the fairways to retrieve their balls! Amazingly, there are no trees on the golf course with which to contend.

Golfers have no one to blame for their errant shots except themselves with the computerized yardage system in each cart. The graphics display an entire layout of the hole, along with the yardage over hazards and advice on where to play each shot. Once in the fairway, it computes the yardage to the front, middle and back of the green, including distance to the pin. It seemed to be fairly accurate, unlike some cheaper models at other courses.

Beginning golfers might consider some of Hidden Valley Golf Club's grand elevation changes and carries over brush-filled valleys quite intimidating, but they can't argue with the course's visual appeal. O'Callaghan seemed to be conscious of the course's tough appearance. He designed five sets of tees with many of the white tees across the forced carries the players face from the blues. The whites play from a considerably shorter length of 5,826 yards.

O'Callaghan was also generous in how he designed his fairways and greens. The fairway landing areas are wide and many of the greens incredibly oversized to accept long irons or running shots. It helps make the course more playable.

After the par-5, 495-yard first hole, the course climbs about 100 feet to the mountain side for holes 2-6. Several of these holes, including the 388-yard second hole and the 455-yard par-5 sixth, demand challenging, uphill tee shots to fairways more than 120 yards away.

Hidden Valley Golf Club's 314-yard seventh hole tempts the long hitters into false thoughts of reaching the green off the tee. It's a visual trick, though, because the fairway is to the left. Unseen by the golfer on the tee, water and two bunkers rest below the green.

No. 9, a 397-yard par-4, drops downhill 120 feet with a desert-like gully running along the right side of the fairway. Another brush-ravaged washout area guards the approach shot. The Southern California PGA Section ranks this hole one of the best in southern California.

The drama continues throughout the entire back nine, but No. 13, a 148-yard par 3, and No. 15, a 574-yard par 5, are the highlights. The 13th tee provides the most majestic view of the entire course below. It's almost hard to concentrate on the tee shot.

The 15th hole plummets nearly 220 feet from tee to green. Although the hole bends right, stay left the entire time or what's known as "heartbreak wall," another sensitive wildlife area, will swallow your ball. 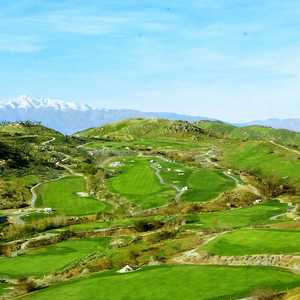 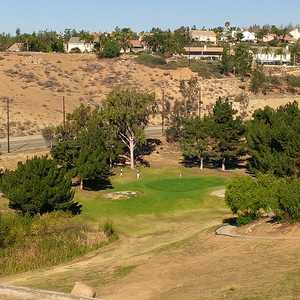