California excels in providing visitors and residents plenty of options for golf excursions. For some, the Monterey coast ranks first, but the course-saturated communities near Palm Springs have their devotees, too. Others prefer the vistas and high-mountain air found in the outstanding offerings of the Truckee-North Lake Tahoe region.

When it comes to deciding where to play, one area gets overlooked, yet it's the region in which it has given the state its nickname and now has gained worldwide recognition for a completely different industry. That's what you get when you golf in the Golden State's Gold Country.

Located in the foothills of the Sierra Nevada about two hours by car southeast of Sacramento or due east of Oakland, this region has small towns like Murphy's that drip charm and historic treasures. Three of the courses are in Calaveras County, origin of the famous Mark Twain story, but it also has gained world-wide recognition for its wineries.

Yes, Gold Country is now part of Wine Country, and it's been celebrated.

Perhaps the best way to experience this scenario is to take Highway 4 east from Stockton toward the Gold Country. In Angels Camp, Highway 4 bisects the north-south Highway 49, named after the miners who gained the nickname for the year (1849) gold was discovered at Sutter's Mill, near Sacramento. Here's a rundown of the area's offerings:

Historical Significance: The valley around Copperopolis provided the metal of the same name that became bullet casings during the Civil War.

Ambiance: Understated luxury. Saddle Creek is part of a real estate development that includes a first-rate athletic club to go along with a very good golf course and restaurant. It also sits about four miles from Lake Tulloch, a major source of year-round recreation (water-skiing, fishing).

Course Appeal: Designed by Carter Morrish and Tad Buchanan, relative unknowns in golf architecture, the Saddle Creek golf course is a track you come to like immediately. Each hole has its own character, though the vistas on the back side, especially the par-3 14th, seem more striking. It's a course you can play several times in a few days and not feel fatigued.

Historical Significance: Remains of miners' camps are all over the site, and a stone wall built by American Indians that dates back hundreds of years divides the par-5 fourth.

On-site Accommodations: Guest condos are available, but the ultimate is the Caddy Shack, a former office building that has been transformed into the ultimate Man Cave -- 55-inch TV, huge outdoor grill, horseshoe pit -- that sleeps as many as 12.

Course Appeal: Fun, sometimes tricky course redesigned by Robert Trent Jones II that works its way along and over hillsides dotted with large and smaller oaks. The back-nine has par 4s at No. 14, 16 and 17, and they provide plenty of challenges.

Historical Significance: The former logging community is now known as the town nearest Calaveras Big Trees State Park, which preserves two groves of giant sequoia. According to Wikipedia, it has been a major tourist attraction since 1852, when the existence of the trees was first widely reported, and it is considered the longest continuously operated tourist facility in California

Course Appeal: The front-nine at Sequoia Woods Country Club plays through a meadow that features several water features, challenging rolling terrain and spots of small groves of trees, making accuracy a chief concern. The back nine gets very, very tight. Par 4s of 300 yards or less are common as designer Bob Baldock did well to fit in the par-70 course (38 on the front, 32 on the back).

Location & Topography: About an hour north of Angels Camp along Highway 49 in the small tone of Ione (Eye-own). Open meadows marked by large oaks characterize the front at Castle Oaks Golf Course, while the middle six holes of the back nine play through housing tract.

Historical Significance: Ione served as a main transportation hub for the Mother Lode, the region that became one of the most productive gold-producing districts in the United States. Nearby Jackson is a major tourist spot, and it has a large historic downtown that affects plenty of Gold Country charm.

Ambiance: Mixed. The front nine is open and expansive but only because the homes have yet to be built.

Course Appeal: Of the four, this Brad Benz-designed course from the tips is about as long as Saddle Creek (just less than 6,800 yards) but has more aggressive bunkering and forced carries. The tee shot on the par-4 17th, for example, requires a carry over a 60-foot oak tree in the middle of the fairway. Playing around trees and wetlands to large, elevated greens guarded by menacing bunkering makes this a course single-digit handicappers will love from the back tees. 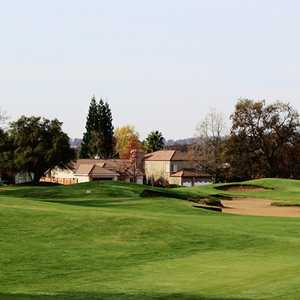 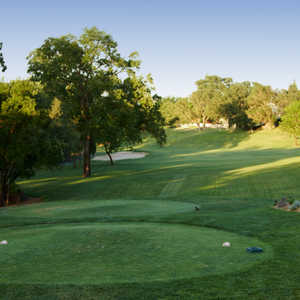 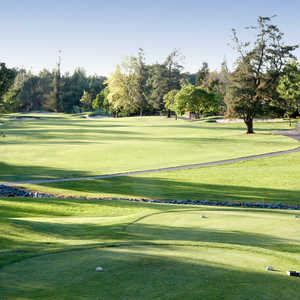