MOORPARK, Calif. -- The wildfires that raced through the Moorpark and Simi Valley in October blackened acres and acres, and many believe the green spaces created by the area's golf courses helped buffer fires from spreading.

Moorpark Country Club was been named on Golf Magazine's 2003 Top Ten You Can Play list.
«

Moorpark Country Club was one of those spared and Golf Magazine recently named it on its 2003 Top Ten You Can Play list. And DarkHorse Golf Club in Auburn's Sierra foothills was a double winner. It was selected as Golf Digest's No. 3 Best New Affordable Public Courses of 2003 and also placed on Golf Magazine's Top Ten new course list in 2002.

DarkHorse is a spectacular 7,203-yard, par 72 designed by Keith Foster, one of the best low-key designers in the industry. Cost starts at $39 for walkers, which qualified it for the affordable category.

PGA Tour professional Tom Lehman and architect Casey O'Callaghan have finished work on Arroyo Trabuco Golf Club in Mission Viejo, and opening has been set for summer. This 7,038-yard, par 72 is a daily-fee course that traverses the parkland setting near Trabuco Creek and the Ladera Open Space Reserve.

The Orange County layout makes Trabuco Creek integral in its strategy with the creek playing as a lateral hazard on seven holes and lakes on a trio of other holes.

Casey O'Callaghan designed the new 6,700-yard, par-71 layout at The Ranch Golf Club which is defined by canyon vistas and elevation changes set amongst hundreds of acres of open space in the southern part of San Jose in the Silicon Valley.

"The views and vistas are spectacular," said club manager Steve Janisch, a former caddie for George Archer. "The whole setting is unique and we are hoping to open this spring." Janisch has also worked at nearby Coyote Creek and Eagle Ridge in Gilroy.

William Lyon Homes and Landmark Golf Company will build 538 luxury home in the master-planned community, but the golf course will be a high-end daily-fee course.

Another new project with golf course and master-planned community is Grizzly Ranch, located along the crest of the northern Sierra Nevada in Plumas County. It's only 10 minutes from The Dragon at Gold Mountain.

This is rural northern California, bounded by the Plumas National Forest and on the west and by Big Grizzly Creek, a tributary of the nearby "Wild and Scenic" Feather River.

Grizzly Ranch hopes to open its 18-hole golf course, designed by Bob Cupp, in the summer of 2005 and its residents will also enjoy opportunities for hiking, biking, fishing, swimming and tennis. Since it is at an elevation of only 5,200 feet, the year-round temperature at Grizzly Ranch is about 10 degrees warmer than Lake Tahoe. Management says that means milder winters and a longer golf season.

It will be the only private golf course in Eastern Plumas County, offering about 380 memberships.

Pebble Beach has announced its intentions of securing the 2010 bid for the U.S. Open. Laguna Seca Golf Course has returned to its original name -- Laguna Seca Golf Ranch in Monterey. A proposed new clubhouse at Pacific Grove Golf Course, a $3.5-million project, is receiving some opposition. Looks like some residents want a more economical model and they want a ballot decision on limiting the size of the new building ... The National Golf Course Owners Association presented Pasatiempo Golf Club in Santa Cruz with its 2004 Jemsek Award, honoring the world's top golf courses, known for top-notch quality, popularity with travel golfers and for hosting major amateur and professional tournaments. The Alister MacKenzie gem opened in September 1929. 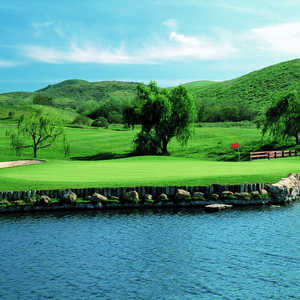