Pebble Beach Golf Links is always going to be the 1,000-pound gorilla of golf in Monterey (unless you're connected enough to score access to private Cypress Point Club).

But the Monterey Bay area is chock full of golf worth traveling from the four corners of the world for, whether Pebble is on your itinerary or not. Here are five more Monterey-area must-plays:

It's a 1966 design from Robert Trent Jones Sr. that still has some teeth despite a championship yardage under 7,000 yards. While it takes a few holes at Pebble Beach to get out to the coast, the first five holes at "The Glass" are in view of the ocean, before turning inward to the Del Monte Forest.

The Links at Spanish Bay

Compared to Spyglass and Pebble, The Links at Spanish Bay is the relative new kid on the block in Monterey, built by Robert Trent Jones Jr. in 1987, with player input from links legend Tom Watson as well as Sandy Tatum.

It was built in the mold of a Scottish links, with pot bunkers, hummocks and high fescue grass. And the ever-present wind can howl on this stretch of coastline, so golfers are advised to keep it low.

Up until 2010, Northern California Golf Association-owned Poppy Hills Golf Course was a rota course at the AT&T Pebble Beach Pro-Am for 19 years before moving to private Monterey Peninsula Country Club in 2010.

The Robert Trent Jones Jr. designed course is set further inland within the Del Monte Forest, and tight doglegs abound, a necessary defense for a course that plays under 6,900 yards.

Monterey is an upscale golf destination for sure, but it isn't all three-figure green fees. Pacific Grove Municipal Golf Links is a cost-efficient muni anyone can play for under $50.

It's a 1930s classic, small greens, few bunkers and short par 4s and 3s. The first nine are inland and designed by Chandler Egan, while the back nine holes heading out towards the coast are designed by Jack Neville, the same man behind Pebble Beach.

Thirty miles north up the coastline in Santa Cruz is Pasatiempo Golf Club, considered by many good enough to included in a Monterey golf vacation.

This Alister Mackenzie course used to be somewhat of a bargain play, until a restoration project by Mackenzie student Tom Doak brought the course back to life, and now it's one of the best in the nation once again (with the three-figure price tag to match). The course doesn't play on the coast, but many of its holes, from high up into the hills, afford views of the Monterey Bay. 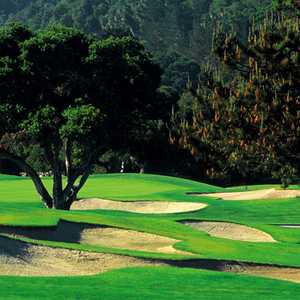