MEADOW VISTA, Calif. -- It is sad to say, but misfortune can turn into a great benefit for some. In northern California, that credo applies to golfers now having access to thrilling, modern courses originally intended to be private country clubs.

The back nine at Winchester Country Club, beginning with the 10th, is more dramatic than the front in visual terms.
«

Winchester Golf Club boasts a championship course that was a collaboration between Robert Trent Jones Sr. and Jr. The foothills of the Sierra Mountains serve as the backdrop to the course, which sits at a convenient elevation of 1,800 feet that puts it right above the fog but below the winter snows. The golf course also enjoys panoramic views of the Sacramento Valley.

Often, these golf courses were part of a real estate development. Once the economic downturn hit, many of these projects looked for ways to stay alive. Opening the doors of the golf club to the public is one way.

To the joy of northern California golfers, Winchester Country Club is one of them.

Situated about 40 miles east of Sacramento in the foothills of the Sierra Nevada, elevation about 2,000 feet, this Robert Trent Jones Jr. design sits as the centerpiece of a Shangri La-like home development. The clubhouse looks like the castle used in the 1960s film, "Where Eagles Dare," and I half-expected Clint Eastwood and Richard Burton to emerge from behind a stone wall.

This is a golf course meant to be had by cart. It's holes scurry through and over ridge lines, skirt steep fall-offs as the path winds to another presentation of golf's challenges, amazing views included.

Needless to say, elevation changes have to be accounted for, as noticed on the approach to the clubhouse on Winchester Drive, which affords at one point an amazing glimpse of the Sacramento Valley.

The course opened in 2000, and club manager John Welch mentioned that, as far as he could tell, Winchester is one of the five last courses where Jones and his famed father, Robert Trent Jones Sr., worked together. Specifically, Welch said, the par-4 12th, called Jones' Legacy, is the last hole designed together by father and son course designers.

I am not a big fan of mountain courses that require carts to serve as Sherpas for man and clubs. That said, Winchester Country Club can bring many a thrill. It's also a difficult course, pure and simple.

For a golf course that dances along the geological spill of the Sierra Nevada, there is plenty to consider: deep oak and fir stands, creeks, wetlands and large rock outcroppings. To all that, Jones Jr. breaks out all his tricks.

On the first hole, a 375-yard uphill par 4, he puts a bunker to hide the view of the fairway, adding a little uncertainty to that opening tee shot. His bunkering isn't penal and those in the fairway serve more as hints to proper direction. He makes up for it with wicked slopes on the greens.

Jones Jr. stands out for his short par 4s, with the 12th being a good example. It plays uphill at 354 yards, but a large bunker dominates the landing area. Playing left and short is an option, but that leaves a longer approach to a raised green. A decisive and well-struck drive over the bunker leaves a short approach. That's Jones Jr. -- know when to attack.

The front nine is a little harder than the back, which happens to be more dramatic in visual terms. The 457-yard 10th is a sharp dogleg left that allows a big hitter to get the long roll for a 300-yard drive. The 13th plays all of its 574 yards, with a mean forced carry of about 180 yards, this after a good drive.

The approach on the short par-4 14th is another example of Jones Jr. at work. The green is an inverse V, so the point greets the golfers and the rest of the putting surface widens to the rear.

Within this configuration, Jones Jr. has built in severe shelves so that a slope protects each portion. And the both sides of the point of the V at the front fall off into closely mown chipping areas.

"I like that, you have to hit the shots," said Mark Burns of Paradise, who drove two hours to play Winchester. "It's a course where you have to know where to be precise."

Some say the par-3 15th is Winchester Country Club's signature hole, but there are many from which to choose. The par-5 18th plays among the large rocks as it climbs back toward Clint and Richard in the clubhouse. One thing is for sure: At the end, you realize that you've been on a thrill ride at the base of the Sierra Nevada. 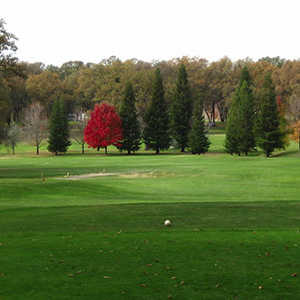 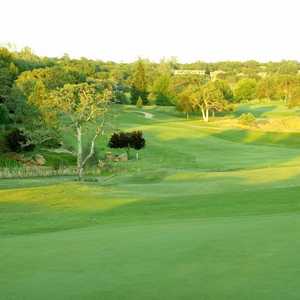