The Valley is one of two 18-hole golf courses at Robinson Ranch. As the name would imply, the course is tucked into the Santa Clarita Valley next to the Los Angeles National Forest. California Sycamores, coastal live oaks, and stands of sage and chaparral blanket both golf courses.

The golf holes by senior Robinson, who passed away four years ago, lace some of the best real estate developments in the state, with Indian Wells Golf Resort near Palm Springs being a prominent but easy example. In so doing, many of his layouts had to compensate for home development. Water features, good short holes and creativity within constrained sites marked his work.

But late in his career, with the help of his son, Ted Jr., Robinson Sr. got to stretch out on Robinson Ranch, an unencumbered 400 acres of scrub and rock dotted by oaks and willows about 37 miles north of central L.A.

What makes the club is the open space of it all, because it is tucked against the Angeles National Forest. Though homes do touch part of the 10th hole on Robinson Ranch's Valley Course, the overall experience one gets from either course is an adventure through the wicked scrub and heartless rock of near-desert topography. And, yes, there are snakes in the untouched areas, so be warned.

Stepping back, this 36-hole facility features a sumptuous, inviting clubhouse, full practice range and enough "country club" ambiance to make one wonder if monthly dues should be part of the experience.

The Valley Course at Robinson Ranch is longer and tougher, and when I visited the site in the late 1990s, it was the thinking of both Robinsons that the Valley would be the championship venue.

That shouldn't negate the features of Robinson Ranch's Mountain Course, which -- as its name suggests -- has more elevation changes. Its holes tend to be shorter but tighter, though its front nine plays through large oaks and rock outcroppings.

Visually, the par-5 ninth from the back tees and the tee shot on the par-3 seventh stand out. All holes require managing la belota blanca around the hazards to reach some of the best greens in the L.A. Basin. Everyone will find all they want on holes 13-16, known as "Death Row."

It starts with a 548-yard par-5 that slopes down and to the right. Large trees guard the right side of the third-shot approach over a dry creek bed. The green on the par-3 14th is divided by a steep slope, making it paramount to get the 210-yard approach shot to the correct level.

The downhill 15th requires a bomb between two oaks, but the tee shot on the dogleg left 16th requires a precise lay up off the tee for a 160-to-180-yard approach to a canted green.

The Mountain Course doesn't have a strong stretch like that, but there are those who find the Mountain more appealing. From the blue tees, the Mountain is shorter by 400 yards and seven points less in slope rating. It could be said that the long-hitter would prefer the Valley while the shorter-but-accurate golfer might take to the Mountain.

Either way, the pond on the Mountain's 18th has to be carried by all. But there are no monthly dues to worry about.

It would be difficult to call the Valley Course at Robinson Ranch the best design by Ted Sr., not with a resume that includes Sahalee Country Club near Seattle (site of the 1998 PGA Championship) and The Experience at Keole in Hawaii. But Robinson Ranch shows the experience of one who had gained a career of knowledge on how to string together a compelling, always interesting set of holes.

Note that the Valley's course rating from the 6,500-and-change blue tees is a whopping 141. There are plenty of hazards on the edges of the holes: namely scrub, rock, tall native grasses and barrancas. Obstacles have to be carried as well. The bunkering is strategic.

It's not a punishing golf course, just one that rewards good distance off the tee and good approach shots. But it's done within such a beautiful setting that shooting a higher score than expected tends to be secondary to feeling of "getting away from it all."

"I like the openness," said Dan Packer, a construction project manager from nearby Valencia who plays Robinson Ranch regularly. Packer pointed to the relatively lush vegetation along the left side of 10 and 11 and then turned towards the barren gray rocks but a couple holes to the west.

"The ocean air comes up and sits in different parts of the course, and you see it in the growth," Packer said. "But I like the feel here. It's quiet. No homes." 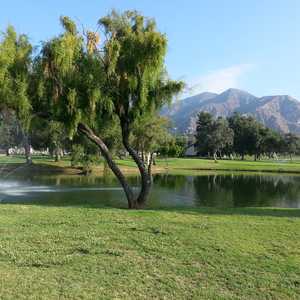 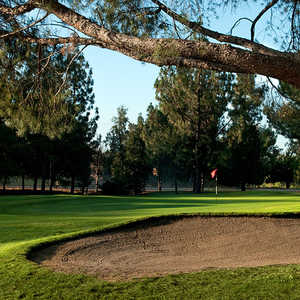 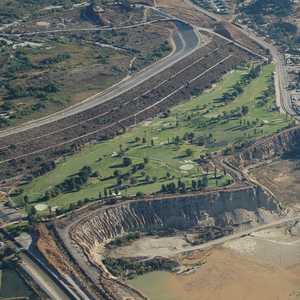