SAN RAFAEL, Calif. -- Course architects say the easiest job is to transform untouched land and turn it into a golf course. But ask them to work with restricted land and translate their design into a course that offers interesting shots among a variety of holes, then it becomes a test of architectural creativity.

Peacock Gap Golf Club is only 6,200 yards, but it will require some forethought off the tee and precise approach shots.
«

Peacock Gap Golf Club extends along the shores of San Pablo Bay, but it sits inland enough to avoid the fogginess of the coast and enjoy consistently sunny weather throughout the year. The course's layout has undergone many renovations over the years that have brought it to its current playability

In that category, Peacock Gap Golf Club in San Rafael, a bucolic suburb about 10 miles north of San Francisco, stands as a pretty good example.

It's not a course that will wear you out because it is only 6,200 yards and has relatively little elevation changes. But it will require some forethought off the tee and precise approach shots. It is more than a driver-wedge course, and that brings you back.

Designed by William Bell in 1962 but remodeled in 2007 by Forrest Richardson, Peacock Gap is an easy walk with some compelling golf. Lack of space obviously forced Bell to restrict the routing, as exemplified by the downhill, 110-yard, par-3 10th. Though the 10th hole is guarded by several bunkers and the swales in the green, it's a relatively easy par.

The 11th also looks easy -- 380 or so off the tee, a slight dogleg left. But the drive must stay right center to open up access to the green. But too far right, and there are trees and a small canal. In fact, canals border and bisect many of the back-nine holes.

You see the point: It's not about power so much as precision. And scoring well comes down to hitting the greens in the right spot. Less-than-precise approach shots induce putts of good distances that must cover swales and ridges, recipe for a three- or four-putt experience.

"The thing about Peacock is that it's fairly flat, so it's an easy walk," said Dan Giesen, of Mill Valley. "The holes are close together. The remodeling project made many of the holes more interesting. It's also semi-private, so there are lots or members who play the course often, and that creates a real friendly atmosphere."

It follows that Peacock Gap's challenges come in some tight driving holes guarded by natural grasses or water hazards. Once those are negotiated, the challenges remain in the second shots, thanks to the remodeled greens by Richardson. He enlarged them and added ridges, plateaus, swales and undulations.

Peacock Gap has a large grass driving range, complete with practice chipping green, practice bunker and large putting green. The course offers a full complement of group and individual lessons; and this fall, a practice-area clubhouse, complete with snack shop, will open.

Long hitters might find Peacock Gap Golf Club less than a challenge, but it keeps its defense up throughout thanks to the difficulties surrounding and on the greens.

Flared bunkers turn misjudged approach shots into big challenges to save par. Richardson enlarged the greens, but they present small targets due to the swales and plateaus. With no major topographical influence -- such as a mountain or an ocean -- on which to judge changes, reading breaks can be tricky. Thus, poor approach shots bring long putts, and, well, less-than-precise judgment, break and speed can bring bogey.

At the same time, there is a quaint nature to the place. Built within a residential area, it's a core course with very short walks from green to tee. There is a good mix of short and nearly long. Better yet, on the short holes, well-judged and well-struck shots bring the best chance for birdie. In that comes the satisfaction.

The straight-as-a-runway seventh is an easy par 5, but the redesigned, par-3 eighth is a gas. In many cases, the tightness of the hole takes away driver, which in turn puts a longer iron in hand for the approach.

Poor drives, due to the trees and the bunkers protecting the greens, offer little chance for reaching the putting surface and a good birdie chance.

Stay and play in San Rafael

San Rafael has a full complement of hotels and restaurants. It's downtown orients around 4th Street, and off that is Sol, a Caribbean restaurant of amazing quality and value. Expect a wait for a table.

Don't want to wait? There are many restaurants within easy walking distance. Of note is New St. Georges, a nightclub that features music on the weekends. Years ago it was not uncommon to have Huey Lewis and the News show up for an unannounced set. And San Rafael is the home of Carlos Santana. 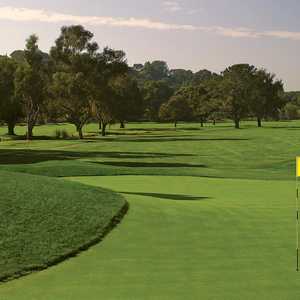 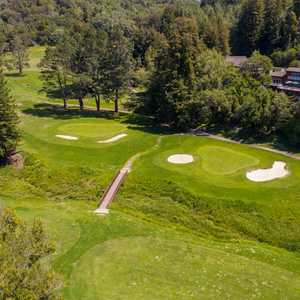