BORREGO SPRINGS, Calif. -- From San Diego, the drive to Rams Hill Golf Club is beautiful, but treacherous. You'll want to give yourself plenty of time to wind your way around the curvy mountain roads. It's one of at least two reasons golfers might want to stay overnight in Borrego Springs when planning a golf trip to Rams Hill.

Located at the heart of the immense Anza Borrego State Park, Rams Hill Golf Club sits perched on a hillside overlooking the desert floor. Tom Fazio designed the course, fully utilizing the existing features of the terrain from the natural slopes and undulations to the many lakes and streams. The layout features rolling fairways and elevated greens framed by carefully sculpted bunkers.

The other reason is that Rams Hill Golf Club is so good that you'll want to play it at least twice. With the Santa Rosa Mountains as a backdrop and very little civilization in sight, Rams Hill is beautiful and peaceful. And it's a heck of a golf course.

Located in a town that doesn't have traffic lights or fast food, this may be one of the best Tom Fazio-designed golf courses that so few have played. It sits on the site of the old Rams Hill Country Club, a 1983 Ted Robinson design that got more than an update. While Fazio managed to incorporate some of the features from the old design, namely the lakes, it looks nothing like the old private club. At first, some of the old members were upset, but once they saw the course, most agreed that the new product was something special.

"Everybody who plays it loves it and wants to play it again," said Steve Gregory, general manager and superintendent at Rams Hill Golf Club. "It's a course you never get tired of playing."

Rams Hill is not your typical golf desert golf course. It's sort of a hybrid between desert and links golf, and it has those ever-present Fazio bunkers, both in the fairways and around the greens. There is wispy high grass and natural desert flowers, and one scenic hole after another.

More than anything, though, the course presents all kinds of options from its five sets of tees, which play between 5,000 yards to more than 7,200 yards. The greens provide plenty of bump-and-run opportunities, but there are times when you'll want to fly it to the hole to bypass some of the greens' tricky undulations. You can lay up off the tee or try to bomb it on some of the short par 4s. And the par 5s generally present risk-reward opportunities.

The course has several holes that feature elevation changes, some as much as 100 feet, presenting downhill driver opportunities and uphill approaches. There's water on a half dozen holes, including a large lake on the par-5 18th, which is a dynamite finishing hole.

Although Rams Hill Golf Club is less than 90 miles from San Diego, the trip out to the desert can be taxing with the narrow roads, sharp curves and drop-offs. It's a scenic drive you should avoid taking at night.

With that said, the trip is well worth it. Not long ago, the course was a high-end private club. And while it no longer operates that way, the ambitious golf course remains and visitors can play it for a fraction of the price it once commanded.

Rams Hill makes for a great buddy trip. Or if peace and quiet are your goals, there are several quaint bed and breakfasts at your disposal. 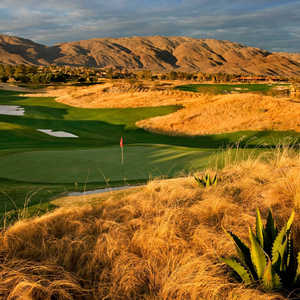 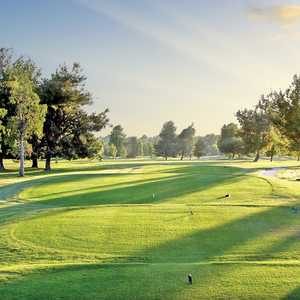 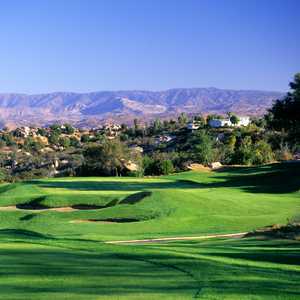