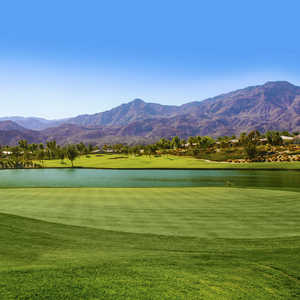 
Tee times in this area

Located in the eastern half of Coachella Valley, Coral Mountain Golf Club (formerly known as "Trilogy Golf Club at La Quinta" and "The Golf Club at La Quinta") has a scenic desert landscape that showcases the beauty of southern California. Opened in 2002, the club hosted the PGA Tour LG SKINS from 2003 to 2006, testing the skills of pros like Phil Mickelson, Fred Couples, and Tiger Woods. The golf course is situated at the base of the Santa Rosa Mountains, offering scenic views and a hilly terrain that provides interesting undulations in the greens. The rugged desert is accented by lush oases of dramatic water features, which of course serve as challenging hazards. There are also bunkers bordering the fairways and rolling greens. The golf course can be as challenging or as gentle as you like with several tees available, including the SKINS tees, which play at nearly 7,200 yards.