Lake Chabot Golf Course, credited to William Lock and opened in 1923, measures an untouched distance of 6,000 yards with a par of 72, and yet it will test your skills.

You'll forget you are in Oakland while playing Lake Chabot Golf Course's back nine.
«

Situated within the Oakland Hills, Lake Chabot Golf Course offers stunning views that stretch across Oakland, Bay Bridge, and the Lake Chabot area. The terrain is hilly, which makes flat lies hard to find. Accuracy and precise shot placement will get you far. The stretch of holes from the 15th to the finish has the best scenery on the golf course.

OAKLAND, Calif. -- Oakland is famous for many things, some of which, I am going to presume, lurk under the radar of golf fans.

The Oakland Open, formerly one of the premier tournaments on the Pacific coast, was held at Oakland's Sequoyah C.C. from 1938 to 1944 and featured prominently in the early professional careers of Ben Hogan, Sam Snead, Byron Nelson, Jimmy Demaret and others. Few courses have as treacherously sloped greens as Sequoyah.

Nearby Claremont Country Club was re-designed by Alister MacKenzie with help from Robert Hunter, the latter also assisting in the development of Pasatiempo Golf Club and Cypress Point Club. Few courses have as demanding a foursome of par 3s as Claremont.

In this tradition sits Lake Chabot Golf Course, an 18-hole course credited to William Lock that opened in 1923. It measures an untouched distance of 6,000 yards with a par of 72, and yet it will test your skills but also give you an indelible picture of golf nearly 90 years ago.

Different and charmingly quirky, Lake Chabot is the undiscovered uncle of the family. Once you get to understand it, you realize its charms. Example: It's the only course west of the Mississippi River with a par-6 hole, here realized as the wicked No. 18.

Lake Chabot is a core golf course with postage-stamp greens (small and round), minimal bunkering and elevation changes ripped from a FIS downhill ski course. Add in some moguls and snow, and Lindsey Vonn would be here.

Good luck measuring the 125-yard shot down an elevator shaft that is the par-3 ninth. How much extra do you add to the 339-yard, par-4 11th, where a second shot has to reach a green four stories above the lowest part of the fairway? The par-4 10th is barely 300 yards but might not be wide enough for a bowling alley lane and the side gutters.

You get the point: tight, up-and-down with minimal bunkers and no water hazards, because there is no need. The site resides next to the Chabot Regional Park District and thus sort of a tight, wild-and-natural walk through the hills where fox, coyote, deer and, yes, mountain lions are still prevalent.

"You'd never build a course like this today," admitted Director of Golf Grant Wingate. "There'd be all this grading and cut and fill." And that's a good thing.

By the time you get to the 14th -- a short par-4 atop the hills -- on a clear day you'll forget your score and the sore legs and the hunger and just gasp at the view of downtown Oakland, San Francisco Bay and the city itself, resplendent in the distance.

For a course that opened in 1923, Lake Chabot is rich in local history, but its past includes suffering through a prolonged down time after the turn of the 21st century. Lake Chabot had to close for three years. Steve Harker, president of Touchstone Golf, contacted the city of Oakland about re-opening the course.

"There wasn't any grass in the fairways," Wingate pointed out. "The pro shop was minimal at best. It was lost. And we brought it back, thanks to the city of Oakland and Touchstone."

According to Wingate, Lake Chabot now is a profitable public course that exceeds 60,000 rounds a year as well as serving as hosts for First Tee Oakland and other local youth programs. It's an Oakland city tradition that an Easter egg hunt be held on the course.

Also, it's a tradition for LCGC regulars to come out and sit on the hillsides and watch the region's best amateurs in the Oakland City try not to four-putt the 18th green.

Lake Chabot Golf Course is not going to set standards for immaculate maintenance, but it is going to challenge you to place the ball in the fairway and then pull the right club to accommodate the severe elevation changes.

Any approach that stops on the green becomes a good birdie chance, because the greens are so small. That alone makes it a connection to another era.
`
Also, it is a course where the entry road bisects five holes. So, like St. Andrews, golfers wait to allow others to pass. Yet the greens are about 10.5 (according to Wingate) most of the time, and with the slopes, it means managing your approach shots, otherwise get used to three-putt bogeys or worse. 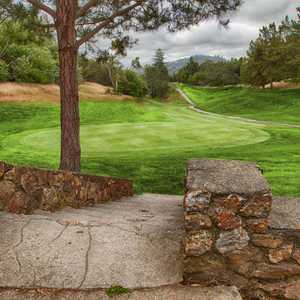 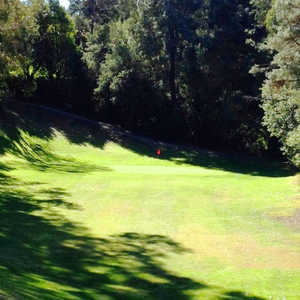 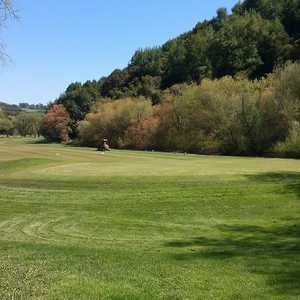