With the Journey at Pechanga golf course in Temecula, the Pechanga Band of the Luiseno Indians and the Arthur Hills/Steve Forrest design team joined forces to create a gem that does more than pay lip service to preserving tribal culture.

The fifth hole at Journey at Pechanga is the spot on the golf course where tribe's heritage is first seen.
«

TEMECULA, Calif. -- Life is truly a journey -- even when ancient footsteps lead to a brand-new golf course.

Let's retrace the moccasin tracks of the Pechanga Band of the Luiseno Indians. They lived for 10,000 years in the Temecula Valley, but that all changed in 1873 when ranchers convinced a San Francisco District Court to evict the tribe from their ancestral land and placed them on a small plot in the hills south of Temecula.

One can just imagine an unhappy band of American Indians. But years later, in 1882, despite bickering in the California Legislature, President Chester A. Arthur gave them back a small part of their original sovereignty, when an executive order returned 4,000 acres creating the Pechanga Indian Reservation.

It was here the tribe built the massive Pechanga Resort & Casino in 2002, which is a mere 50 minutes up I-15 from San Diego, and then opened its Arthur Hills/Steve Forrest-designed golf course, Journey at Pechanga, in August of 2008.

When Hills and Forrest arrived to survey the land, they found room for reasonably flat holes and hilly terrain that presented some climbs into the rocky, rugged slopes that presented the opportunity for hang-time tee shots.

"The grandeur of panoramic vistas, rock outcroppings, stately old oak trees and the mountain edging one side of the course became a tapestry on which to weave the strategic aspects of the game of golf in order to evoke the spirit of competition," said Hills. "Throughout the design, we have remained dedicated to leaving plenty of room for relaxation and fun along the way."

Journey at Pechanga, a 7,219-yard, par-72 golf course, was not only designed with environmental sensitivity but also with a preservation of the historic tribal culture of the Pechanga Band of Luiseï¿½o Indians.

Countless sacred oak trees were protected -- including one called "The Great Oak" -- one of the largest natural-growing, indigenous-coast, live oak trees in the United States and estimated to be anywhere from 850 to 1,500 years old. These trees are amazing to view until your golf ball lands in one.

Forrest said it was visualization that the team weaved strategic aspects of the game in to, evoking a spirit of competition with plenty of room for fun.

"The first nine was pretty easy to envision," he said, "being on flat land."

The real challenge was using the sloped hillsides that forced the team to go up sometimes 300 feet creating a total of seven miles of cart paths. The Pechanga Creek also adds to strategy as boundaries on some holes.

The first truly scenic hole at Journey at Pechanga is the fifth, a par 4 of 351 yards with a lake to carry and a green protected by a snaking, rocky water feature. The tribe's heritage is first seen here -- to the right of the green is a crumbling adobe ruin and "Kiicha" huts, built by children as a cultural education.

Then your amusement ride expedition really begins as you climb up 300 feet to the 488-yard, par-4 sixth hole.

"The hang time there is stupendous," Forrest said of the drive.

The fairway is 200 feet below, and there's a wooded ravine beckoning left and right. Even if you smash one to within 100 yards of the green, the putting surface is severely sloped from front to back making it hard to hone in on the flag.

My favorite was another hang-glider drop. No. 17 is a par 3 and 180 yards with a view of the Frank Lloyd Wright-inspired clubhouse and casino in the panorama. The green presents itself as a tubular, horizontal target. A huge white-sand bunker bumps the putting surface short, actually saving you from a ravine that gobbles up balls into oblivion and red-stake territory.

Eagle's Nest appropriately describes No. 18 -- a 442-yard, par 4 that descends another 200 feet. Stay right of the large outcropping at the edge of a deep chasm and a huge old oak. But even if you survive the cliff-plunge tee shot, you find a Biarritz green on your approach -- a putting surface that has a deep gully in the middle and two halves left and right on higher ground.

After finding the gully and seeing your putt up to the hole, Biarritz, named for a French town where the golf-course feature was first used, you might come up with your own slang term for its difficulty.

Journey at Pechanga: The verdict

You will get some grumbling from golf architecture "purists" about The Journey at Pechanga since walking is not allowed because of the holes on the steep hillside. But don't let that scare you away. This is a fun golf course.

Pechanga Resort & Casino has Four Diamond comfort and amenities in each of its 522 guest rooms and suites. Each oversized deluxe room has floor to ceiling windows, a huge master bath, wet bar and separate sleeping quarters, and some rooms have Jacuzzis.

Don't miss Journey's End, located in the 62,000-square-foot clubhouse. It offers gourmet food, indoor and outdoor dining, a bar and vistas of the golf course and hills. The clubhouse features a 4,000-square-foot foyer that displays a three-story waterfall that ends at the entrance of the locker rooms on the lower floor.

Eight other dining options are located in the casino, including four gourmet restaurants, and a spa is located on the third floor. 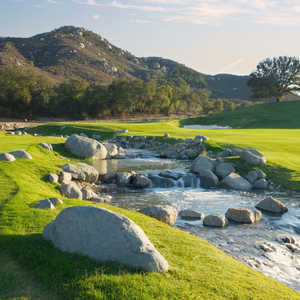 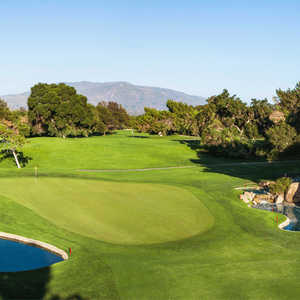 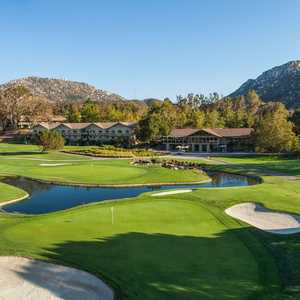