Adjustments in the way this round would be scored were recognized early. The traditional scorecard just wouldn't do. Like most golfers, I can get humbled by the game. That 13-handicap means I can butcher my share of shots each round.

Unfortunately, the humbling process began way too early as the dream of playing Pebble Beach Golf Links became reality. Heading into the 2000 U.S. Open media day, I made a pact with myself, promising not to let any awful play detract from enjoying the experience.

With that in mind, I devised a new scoring system early in the round when I began making regular deposits into the clear blue Pacific Ocean. I would keep track of lost balls and total up the number of pars, which clearly weren't going to be a lot.

Under the revised scoring, I escaped the treacherous nature of Pebble Beach 2-over par. Translation: I lost five balls and had three pars, hence the two-over score. As a golfing buddy was quick to point out, the 98 on the real scorecard arrived in near perfect conditions for Pebble, notorious for rain, swirling winds, fog, and temperatures that were fine for a seal, just not too pleasing for a guy in golf shoes.

Thankfully I didn't take the opportunity to play Pebble lightly or I might have shot 128. So much for excuses, wish I had some. I even did the homework, calling up the famed course on the Internet and jotting down suggestions from Johnny Miller about playing each hole. I also played 18 holes the day before, shooting well enough to feel confident when the real test arrived. Yet Pebble still swallowed me up and spit me into the ocean.

Golfing fans from around the world will focus on Pebble Beach in mid-June. Thankfully there were no cameras around to record what could be my one and only journey around the famed Monterey peninsula course.

It's been said that this beautiful setting for golf was one of God's greatest creations. No arguing that point. If there is a more exquisite golf course somewhere, I want to see it. Yet it could also be said that the devil had a little hand in laying out some of the holes. Believe me, they can be punishing.

A shotgun start at 7 a.m. was running a bit behind schedule as my foursome approached our first hole. From studying the course, I knew that this was not the ideal place to begin the round. It might harbor Tom Watson's favorite memory, but I had a feeling my recollections of the ocean-side par-3 at No. 17 would not be as rewarding.

Just why the nervousness arrived I'm not really sure. All I know is when I stepped up for the first shot with my favorite club, that 5-wood felt like I had never hit it before. With the ocean a distinct possibility, I aimed for the bailout area to the right, never intending to go at the pin.

Naturally, the shot hooked left. Thankfully the high, wet grass kept it from heading into the Pacific. Relieved, I chipped toward the small hourglass green, the same one Watson danced on after a miraculous chip for birdie helped him defeat Jack Nicklaus on the final round of the 1982 U.S. Open.

My chip wasn't as nice, but still landed within three feet of the pin. Having heard how treacherously fast these greens ran, I tentatively putted for par, leaving it short. Oh well. A bogey anywhere on this course wasn't bad.

Up next was the 18th, as scenic a finishing hole as one could imagine. The rugged coastline rests to the left, not a good location for a person with an occasional hook off the tee. No problem this time, the drive went straight down the fairway.

Of course, this is not just any fairway. Many champions have strolled this stretch of immaculate grass late Sunday afternoon, the approving roar of the gallery ushering them toward the final hole of the tournament. Anyone who has won at Pebble can't help but get lost in the moment.

My trip up the 18th fairway was nothing to savor. There was not a soul in sight as my third shot landed in a greenside bunker. From there I hit into another trap and two-putted for a double bogey. Ouch.

Despite a poor start, I wasn't feeling too bad, understanding the first five holes on the front side were some of the easiest Pebble had to offer. My confidence was up again after just missing a par at No.1, then recording that first elusive par on the next hole. Another six inches and it's a birdie.

That giddiness left rather quickly at No. 3. Nothing super challenging here on the dogleg left, par-4. Yet I managed to get in serious trouble, starting with a poor tee shot that landed in some deep rough. There was no way I should have triple-bogied this hole, yet that's what happened.

Trying to stay focused, I made the first of several offerings into the Pacific, pushing a tee shot at No.4 into the ocean. A charitable type, I put another one in the ocean on my next swing. The last hole was bad, this one was even worse. I welcomed aboard the snowman, that 8 on the scorecard really sticking out.

Time to recover, or so I hoped. Glancing at the Johnny Miller tips in a notebook didn't help as I prepared for the redesigned par-3 hole along Stillwater Cove. "Dartboard accuracy is required," Johnny warned. I played darts more frequently than I went to class one semester in college, but that didn't help as my errant tee shot hit right of the green and headed down a steep cliff, destination Pacific Ocean.

I resisted throwing my 6-iron in the water as well. Easy big fella, this is supposed to be a fun day. I managed a double bogey and headed to the cart wondering why I ever seriously began playing this silly game eight years ago.

A mere 13-over after seven holes, that's when the decision was made to adopt the new scoring system. Perhaps taking the pressure off, my game began to come back. I bogeyed the next hole, a par-5 that has an uphill slope like I had never seen before. On the delicate par-3 at No. 7, I was the only survivor in our group, getting up-and-down out of the sand for bogey, while the other three players went double bogey.

So what if I lost another ball at No. 8, failing to make a long carry over a wide, scenic cliff. I was hitting the ball well and even making a few putts. I rolled one in from 12 feet for par on No. 11 and followed with a tap-in for par at No. 12.

Now this was more like it, playing solid golf on a day when the weather at Pebble Beach couldn't have been more accommodating. I didn't squander the opportunity, making sure to take in all the scenery between shots, remembering the words of Nicklaus.

"How could you not love Pebble Beach?" Nicklaus once said. "It's one of the most gorgeous settings in the United States and they put a golf course on it."

Despite finishing the round with two careless double bogeys on the final three holes, the one prevailing thought as I finished the round was this: How do I get out here again?

Somehow, I need to convince my wife that $325 to play another round of golf at Pebble Beach is money well spent. 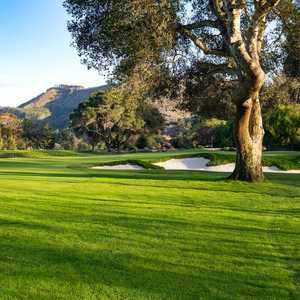