Mention the Northern California city of Nicolaus and don't pause too long for a reply. Many people in the Sacramento region know little of this sleepy town that resides near the Feather River.

Although geographically not far from downtown Sacramento, that seems to be a little known fact for most people, who don't realize this anonymous town now has its own public golf course, a mere 30 minutes away from the state capital.

"We're closer than a lot of people in the Sacramento area think," said Geno Ivaldi, the head pro at Rio La Paz Golf Club. "We are in the middle of nowhere, but we're actually very close."

In Spanish, Rio La Paz means peaceful river. Indeed, this is a peaceful location, even on its busiest day, which right now aren't that frequent. This city once had great possibilities. Originally the property of the Mexican government, it was deeded in 1841 to Captain John Sutter, who also figured prominently in the settling of Sacramento.

Prior to the discovery of gold at his sawmill in 1948, which triggered the famed gold rush, Sutter deeded the property to Nicolaus Altgeier. The town flourished during the Gold Rush, with Altgeier establishing a ferry service for the transportation of persons and property across the Feather River at the point later known as Nicolaus. Things were going so well for a time that this was the county seat of Sutter County.

In the 1860's Altgeier sold a 600-acre ranch to the Scheiber Family, who like Sutter, had migrated to California from Switzerland. The golf club property today is part of the ranch owned by Allan Scheiber, one of the founding partners in Rio La Paz.

Fast forward around 140 years later and the unassuming folks of Nicolaus are proudly watching the city open its first golf course in late May of 2000. Notoriety is slow in coming, the course averages a mere 90-100 rounds per day as summer turned into fall.

A public course that won't overwhelm the average handicapper, Rio La Paz has long range plans of becoming a country club. Looking for a quick round at a serene location? This could be the place. The course resides in a quiet country setting and on most days a round can be played in brisk fashion.

The yardage is modest, going 6,504 yards from the back tees, 6,060 yards from the middle and a mere 5,429 yards from the upper tee boxes. Big hitters with plenty of game might find this track too easy. There are also a number of golfers who will consider it just right, a place where your game can prosper.

This is a course with some nice variety. There are three par-4s measuring 406 yards or longer, plus several short ones, including a tricky 307-yarder that requires considerable accuracy. What the course does, especially on the back nine, is make golfers think. Make the wrong decision and pay the price. Grip-and-rip it's not. "We have some nice variety, I think that is good, you are not out here hitting long irons all day," Ivaldi said.

The layout is fairly wide, but does require some caution at times. The greens are spongy and not hard like most new courses. Putts run a moderate speed and the greens have held up during another reasonably hot Northern California summer.

However, what needs to take place is further maturity. The greens are thin and even bare in some spots. "You can tell it's still a new course, it still needs some filling in," said Terry Smreker of Sacramento. " But you can tell it's going to be good. It's challenging enough, there are plenty of trouble spots."

Wetlands come into play on the course's first two holes, a pair of par-4s that don't require great distance to be sitting greenside in regulation. The course toughens at the No. 3, a par-3 that measures 193 yards (all quoted yardage is from the back tees) and has a lake bordering the left side. Play the tee shot to the left and even a short lay-up is not a bad play here.

Back-to-back par-5s are up next. These parallel holes offer different challenges. The No. 4 (503 yards) needs to have a tee shot played between the oaks. Beware of bunkers on the right and wetlands to the left if trying to muscle it home in two shots.

At No. 5 (541 yards), the fairway is quite wide, yet trouble lurks ahead with a bunker and water guarding a sloping green that can cause the dreaded the three-putt. Take a par here and be happy.

Another sizable par-3 arrives at No. 6. Take an extra club if the wind is up, this hole goes 209 yards. The good news is the green is flat and there is no trouble in site.

Watch out for the three bunkers at No. 7 (par-4, 406 yards) and keep the approach shot below the hole on the severely sloping green. The par-3 at No. 8 (165 yards) also features a back-to-front slope, but is definitely a birdie opportunity, the easiest of the course's five par-3s.

The ninth hole offers a challenge, thanks to a creek crossing the wide fairway 300 yards from the back tees, which go 419 yards. Take a par on the No. 1 handicap hole and head to a more cerebral backside.

Careful off the tee at No. 10 (415 yards), which features a sharp dogleg. Stay away from an oak-tree lined left side and the hole can be conquered. Not so easy is the next task, playing the difficult par-3 (231-yards) at No. 11.

Take a breather at No. 12, which goes 307 yards, but must have a well-placed tee shot between a pair of tall oaks. The safe play is leaving the driver in the bag. Big hitters might be tempted to use it. Fairway bunkers are the prime obstacles at No. 13 (546 yards), followed by a par-3 (180 yards) at the 14th, which requires a shot over a horseshoe-shaped bunker. The 15th (511 yards) is one of only a few holes with some elevation change. Lakes are on the right and left side, so be careful.

The 16th hole is the personal favorite. Although a mere 341 yards, what to hit off the tee is the first of several choices. There is water left and a bunker 125 yards from the green, which makes the fairway tight. Water in front of a narrow green makes for a nervous approach shot.

Also be careful at the No. 17 (397 yards), where the left side of the fairway has a slope that will kick a tee shot into out-of-bounds territory. Caution is also needed at the 18th (383). Any tee shot a little right heads into the water. Stay close to the middle and this could become a birdie hole.

Green fees are $45 Monday through Thursday, which includes cart and range balls. The price goes to $50 Friday through Sunday. A nice twilight-rate discount ($20) is available during weekday twilight hours. 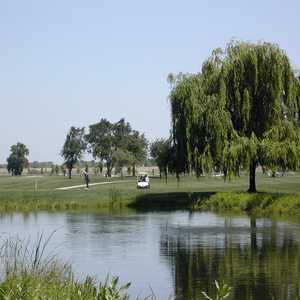 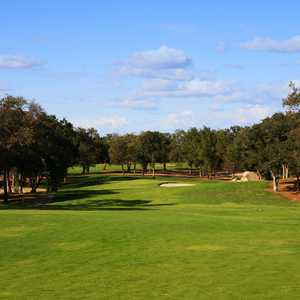