A golfer tees off on the third hole of the Victoria Lakes Course at River Ridge Golf Club.
«

That's especially true during the summer, when temperatures in the nearby inland valleys north of Los Angeles often soar to more than 100 degrees. Even a 20-minute drive from Simi Valley to River Ridge, a few miles from the Pacific Ocean, can mean a drastic temperature change.

"There can be a 30- to-40-degree difference from the valleys to here," said Marc Sipes, head professional at River Ridge G.C. "I tell people it's like playing golf with their air conditioning on. It's usually very pleasant here."

"We get an awful lot of people coming down the (Highway) 101 corridor, from the San Fernando Valley and from as far away as the Santa Clarita Valley. I think a lot of it has to do with the weather, but it also has something to do with a good golf value."

Designed by William F. Bell and opened in 1986, River Ridge is a 6,718-yard, par-72 links-style course created over an old landfill and features nearly eight acres of water.

It's one of those layouts that is like two courses in one, with the front nine played through hilly terrain and the first five holes of the back nine winding through upscale homes on relatively flat ground before returning to the hill for the last four holes.

"There are two very distinct style," Sipes said. Up on the hill, it's links-style, with pretty wide open fairways and great views. You can see the Santa Clara River and the ocean from there. The entire hill is landfill. It's a great way to use the land."

"Then, holes 10 through 14 play through the homes, with water on every hole. In fact, there's water almost everywhere you look on the back nine. Because we're close to the ocean, there usually is some wind but you have to adjust on those holes because it's a little more protected because of the houses."

You will need every club in your bag to play River Ridge. There are several blind shots, starting with the second shot on the 553-yard first hole. Golfers must climb to the top of a hill on the up-and-down 351-yard 16th hole to make sure the green is clear before hitting their approach shots.

"The blind shots go back to links-style golf," Sipes said. "It's just another element of the game. We don't especially like it because we are a public course and get a lot of play, and the blind shots can slow down the game. We probably will eliminate some of that in the future. We will bring in some soil to raise the greens so you can see the people on the green and know when it is safe to hit."

What everyone remembers after playing River Ridge is the tee shot on the 191-yard 14th hole, which features an island green. Players with a strong round going know they must get past the 14th, which is a triple-bogey waiting to happen.

"That's our signature hole," Sipes said. "It's a long shot, longer than it looks, because it plays into the wind. There is no bailout, no place to play it safe. Club selection is very important, because if you over-club, you can hit your shot into the water behind the green. Usually the shot is directly into the wind, which comes from the West, but sometimes you can get a South wind, which really makes it tricky. Then, some really good shots can end up going into the water on the right side."

The No. 1 handicap hole is the 454-yard, par-four fourth. The tee shot to a table-top fairway must be played to the right of three bunkers which line the fairway. The approach shot is downhill, across a gully to a two-tiered green that slopes from back to front. Anything short leaves a tricky uphill pitch.

"It's a difficult drive and then the second shot poses a lot of problems because it is downhill and downwind, with the gully to contend with," Sipes said. "If you hit it short, the ball will bounce down into the gully. If you go long, even if you stay on the green, you probably will be above the hole with a difficult downhill putt. "This is really a good golf hole. You must hit a good drive, a good approach shot and be in the right spot on the green to get away with a birdie or par. You see a lot of three-putts there."

The ninth tee at River Ridge overlooks the practice fields the Los Angeles Raiders used for training camp before moving back to Oakland. The fields, next to the Residence Inn where the Raiders stayed, have been turned into a public facility and the Dallas Cowboys trained there for two weeks this summer to escape the Texas heat.

"I used to play there as often as I could, in between practices," said cornerback Mike Haynes, who went from a Hall-of-Fame career with the Raiders and New England Patriots to an executive position with Callaway Golf. "We would play at 6 a.m. before the morning practice and then I would go back and play again or practice before the afternoon workout."

"When I was finished playing and lived in Los Angeles, I would meet my father, who lived in Lompoc, at River Ridge because it was about halfway. I really like the course, especially the back nine. Sometimes the wind would come up and add another element."

"Being able to play golf made training camp like a country club for me and it was great to play a good course that was not super expensive."

Both nines at River Ridge finish with par fives that bring water into play on the approach to the green.

The 523-yard ninth hole, which runs parallel to the hotel and is the No. 1 handicap hole from the women's tees, is reachable in two shots only for the big hitters. After staying out of the bunker complex on the left side of the fairway, you must lay up in front of the lake which guards the green. Make sure to stay about 125 yards from the hole in order not to end up with a downhill lie.

"We lowered the tee on the ninth hole a few years ago and it opened up the driving area," Sipes said. "The lay-up shot can be tricky getting it into the right spot. Club selection again is very important on the approach because you have to factor in the water, the wind and the bunker in back of the green and another on the right. It looks like an easy third shot to a large green but you can get into trouble very easily. Any time there is water in front, you tend to want to hit the ball a little farther."

The 18th is 497 yards downhill, reachable in two, but with trouble waiting at a green guarded by a lake on the front right, and bunkers left and behind.

The risk-reward opportunity was demonstrated dramatically in the final round of the 2001 Oxnard City Championship at River Ridge. Alex Kuyumajian, the Pacific 10 Conference men's champion from USC, reached the green in two and made his eagle putt to tie J.T. Kohut, from UCLA, who made birdie.

Kuyumajian beat his former Westlake High teammate in a playoff.

"That shows why it's so great to have a par-five finishing hole," Sipes said. "It's not over until it's over. If you hit a good tee shot, it gives you a chance to finish with an eagle or a birdie if you go for the green. But it also brings seven into play if you hit into the lake."

Even the finish is cool at River Ridge Golf Club. 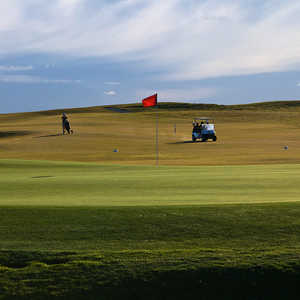 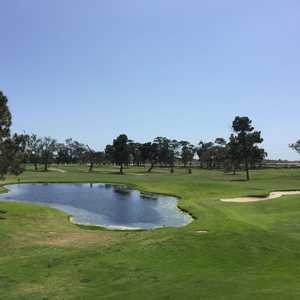