It must have been quite a sight.

Bob Hope, the California desert's No. 1 celebrity comedian with the silky-smooth swing, launched a golf ball through a ribbon that bursted into flames. Fireworks followed.

It was November, 1977, and that was the ground-breaking ceremony for Marriott's Rancho Las Palmas Resort. Fittingly, the resort is located on Bob Hope Drive.

Today, this 27-hole Ted Robinson layout is Rancho Las Palmas Country Club, but is also available for guests of the Marriott resort. It's short -- the North nine measures 3,008, the South 3,015, and the West 3,082, but it can be tight with six lakes that come into play. And every once in a while you might face a towering palm tree in your way.

This is a notable layout for beginners and women golfers.

"Most folks like the condition of the 27 holes and that it is an attracitive layout for all levels of golfers," said Brian Shollenberger, head golf pro. "I think it is challenging for better golfers and even beginners won't lose a lot of golf balls. The scenery is great with 2,000 palm trees, hills, mountains in the background, lots of water and bunkers. Another attractive trait is you can play 18 holes in less than four hours and on the busiest day the pace will be just a little over four hours."

Shollenberger thinks No. 3 on the West is one of the toughest holes: "It's one of longest holes in desert at 645 yards from the back," he said. "The third-shot approach is tough because the green is elevated and has two tiers."

"No. 9 North is another difficult hole," he continued. "It's 390 yards, but its ranked as our hardest hole. "You tee off over a ravine to narrow fairway that is surraounded by trees and thick rough. It's a good challenge."

No. 5 on the West Course is a beauty. It's only 276 yards, a par 4, but it's all target. It's an iron from the tee to an island fairway you must hit, with a lake right extending to in front of the green.

If you hit the target you'll have a birdie chance. Mis-hit the second shot and your are in the drink. Hit it long and you have a tough up-and-down for par.

Another fun target hole is No. 6 on the North. It's straight downhill and then back uphill, a par-4, a 326-yarder, but there's a huge trap right in the middle of the fairway. Most middle to low handicappers can fly the trap on the tee shot, but plenty of high-handicappers will find it.

Rancho Las Palmas has an interesting history. In 1946, H.L. Gogerty, a Los Angeles architect, purchased 320 acres and graded an airstrip to accommodate private planes on 26 acres that is now part of the resort.

Army barracks purchased from post-World War II surplus, were trucked in from Beaumont, 40 miles to the west, to use as rentals for those flying in to the airstrip. There was an old cottage on the property was converted into a dining room in the late 1940s.

The Compass Room Bar with an adjacent swimming pool was built in 1950 and the Desert Air Hotel was opened in 1951 on this site.

Eventually the airstrip was named Palm Desert Air Park and many Hollywood celebrities and other well-known persons including senators and President Eisenhower winged in here in their own aircraft. An early-day TV sitcom, The Bob Cummings Show was filmed in part at the resort, and a press preview of the show was held at the hotel.

Directions: From I-10 going east, get off at the Bob Hope exit and go south towards Highway 111, the resort is on the left about a mile past Country Club Dr.

Marriott's Rancho Las Palmas Resort & Spa is a relaxing desert getaway with luxury casitas. Reserve your casita with a view of the beautiful No. 5 West hole and relax amidst the 240 acres of Spanish-style charm, tranquil lakes, verdant gardens and swaying palm trees. The hotel offers 450 guest rooms and 22 suites.

Spa Las Palmas is another way to relax or you can enjoy the inspiring views of the San Jacinto Mountains, play on 25 tennis courts, rent a bike or sun bathe by the pool and recreation complex that has a 100-foot waterslide, water pop-jets and a hot tub.

Awards: In 1994 Marriott's Rancho Las Palmas Resort was awarded Four-Stars from The Mobil Travel Guide and Four-Diamonds from the American Automobile Association. The resort has received these awards every year since. 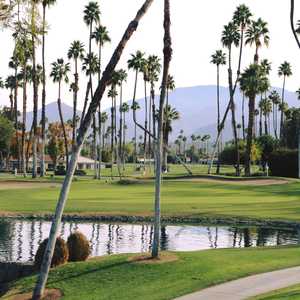 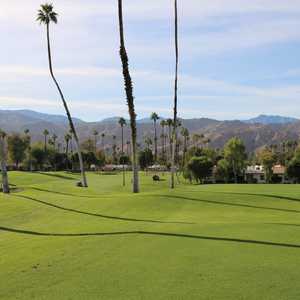