At first glance the Whitewater Storm Channel that runs through the Palm Springs area seems like an unusual place to build a golf course. Although it is dry for most of the year, the channel can become flooded during heavy rains or when the snow on the surrounding mountains melts in the spring.

Cimarron's Boulder course is desert in location, but almost links in feel. It's hard to imagine even the most beer-cart-fueled hacker thinking they're in Scotland. Considering the bright sun, the striking San Jacinto Mountains and all.

Monterey Country Club and Rancho Las Palmas Country Club both feature holes that play through the wash, and a few holes at Tahquitz Creek Golf Resort in Palm Springs also run along the wash. Occasionally, these golf holes get washed out and are sometimes unplayable for a few days or even a few weeks. Until now, however, nobody has considered building an entire course in the wash.

In designing Cimarron Golf Club in Cathedral City, the folks at OB Sports (who also run Angel Park in Las Vegas and The Legacy in Henderson, Nevada, among others) have literally gone where nobody else has gone before.

Essentially, the company has taken land that nobody wanted (due to the flood potential) and put a revenue-producing business on it. The company has built two courses - a 6,858-yard, par-71 championship course and a 3,156-yard, par-56 executive course - in the Whitewater Storm Channel just north of Ramon Road near the Landau Boulevard intersection.

Because the land was inexpensive, the company was able to put more resources toward the golf course and the auxiliary facilities. Renowned golf architect John Fought was hired to design both courses, and he did a masterful job in maintaining some of the natural elements of the wash while creating playable and challenging golf holes.

Previously, he opened the award-winning Gallery Golf Club in Arizona and served as assistant golf course superintendent at the Tournament Players Club of Scottsdale.

Kids and beginners will also enjoy the Short Course because it does not demand great length off the tee.

Rounding out the team is General Manager Bret Greenwood, former general manager at The Oasis Golf Properties in Mesquite, Nevada. He has also served as GM at the Gold Canyon Resort and Golf Club in Phoenix and as director of golf for the Pointe Hilton Resort at South Mountain, also in the Phoenix area.

Among the unique features of the golf course are the bunkers which are filled with a brilliant white crushed marble rather than typical bunker sand. The Long Course features wide fairways and some huge greens, including two double greens. Although the landing areas off the tee are generous, they often drop off abruptly on one or both sides into native wash areas where the golfer will be faced with the daunting task of playing a shot from an unforgiving combination of sand and rocks.

On the first hole, for example, the fairway disappears into a chasm about 100 yards from the green. The hole plays 383 yards from the back tee box, so only long hitters are truly threatened by the gap in the fairway, and they can simply club down to a fairway wood or an iron off the tee. The approach must carry the gorge and avoid the front bunkers.

Holes 2, 3, and 4 all play along the western edge of the wash with out-of-bounds along the right side. This stretch of holes is truly a slicer's worst nightmare because shots to the right are doomed. Usually these holes will play downwind, so despite the daunting 442-yard tag on the second hole, it should play shorter.

The second hole shares a massive green with the seventh, so players who hit the ball from right to left will have plenty of short grass to land on.

Even with a good tail wind, the 599-yard, par-5 third hole is a three-shotter. If the player avoids the center bunker on his second shot, he can set up a birdie opportunity with a short approach shot. The fourth hole squeezes players on both the right (out-of-bounds) and left (sandy wash). Golfers who venture too far either way face a near-certain double bogey.

After the short par-3 fifth hole, the sixth, seventh, and eighth holes run parallel to numbers two, three and four, with sandy wash on both sides of each fairway. At 502 yards, the par-5 sixth is just 20 yards longer than the par-4 seventh. Anything less than ten shots on these two holes is good scoring.

Players should not be deceived by the relatively short approach shot on the 380-yard eighth hole; most golfers will need at least an extra club to carry the sandy wash that lurks just to the left of the green.

The elevated tee boxes on the ninth hole offer golfers an excellent view of the practice facility and clubhouse as well as the daunting 204-yard par-3. The green is actually quite receptive to long irons and fairway woods, but a good chipping stroke can come in handy, too.

After a quick stop for a drink or a snack at the clubhouse, players will follow holes 10, 11, 12, 13, and 14 back down to Ramon Road. As with 2, 3 and 4, the prevailing wind usually blows from tee to green. The 11th, a 413-yard par-4, features three large bunkers in front of the green that will gobble up any short shots.

Players will find that going long is no picnic either, as 11 shares a double green with number 6. Any shot that runs through the 11th green could leave a very long putt from somewhere on the sixth green.

The course description (conveniently placed inside the scorecard) recommends aiming at the fairway bunkers on the right for the best angle on the 548-yard par-5 13th hole. Only the strongest players can reach this green in two shots, so the key is to place the second shot in the fairway at a comfortable distance from the green.

At 218 yards, the 14th is the longest par-3 on the course, and it is also the last southbound hole before the course turns back north toward the clubhouse. The 15th is a short par-4 (339 yards), but players must be accurate with the tee shot and approach shot alike to avoid the numerous bunkers that dot this challenging hole.

The 16th is another long par-4 that stretches to 474 yards from the back tee box, requiring two powerful shots to reach the green in regulation.

The two finishing holes mark the only use of water on the course. The 17th is a spectacular 169-yard par-3 that calls for an amateur's worst nightmare - a carry over water to the green. The best target is the center of the green, regardless of pin position.

On the par-5 18th, the water is more cosmetic than in play, but players must still avoid the sandy wash on both sides and the fairway bunkers that pinch the landing area for the second shot down to a small strip of fairway. However, an accurate approach shot could yield a birdie and a rousing finish to an exciting round of golf.

If you don't have time for a regulation round, try the Short Course at Cimarron. This is a top-notch executive facility that offers a unique challenge on every hole. At 3,156 yards, the Short Course is less than half as long as most of the championship courses in the Palm Springs area, and golfers can play 18 holes in less than three hours.

Leave the driver home if you play the Short Course because the longest hole is only 313 yards from the back tee box, but be sure to bring an extra wedge because you're bound to need it around the greens.

The best holes are not the two par-4s but the more challenging par-3s such as the seventh (which features a huge bunker to the right of the green), the ninth (which has bunkers to the left and a steep drop into the wash on the right, the 11th (more bunkers guarding the green), and the 18th (which calls for a tee shot over a lake).

After a round on either course, Cimarron offers the comfortable Leapin' Lizards Bistro, a full-service restaurant in the clubhouse that offers breakfast, lunch, and dinner daily. The menu includes fried alligator, crab melts, shrimp enchiladas and lime cheesecake as well as more traditional fare like burgers and hot dogs. Guests can also enjoy a cool drink at the Lizard Lounge.

Cimarron is just a hop, skip, and a jump from several other fine golf facilities, including Desert Princess Country Club (part of which runs parallel to the final four holes on the Short Course) and Cathedral Canyon Country Club, a few miles to the south. Want to get rid of the kids before you tee it up? Drop them off at the IMAX Theater in Cathedral City, just a five-minute drive from the course, or the Cinemark Theaters at Date Palm Drive and Dinah Shore.

Recent offerings on the giant six-story IMAX screen have included the Disney extravaganza Fantasia 2000. The Cinemark, meanwhile, is where hit movies play just before they go to video. Matinee showings at the Cinemark are just $1 per person.

Cimarron's location - just a few minutes from the Palm Springs Airport on 30th Avenue, just off Landau between Ramon Road and Vista Chino - makes it an easy stop for travelers who want to get in a quick round before a flight out of Palm Springs or an afternoon round on the day they arrive in Palm Springs.

The Long Course will shut down in the summer to be sprigged with Bermuda grass for next summer, but the Short Course will be open all summer, and it's a perfect place to work on those short shots that cost every player strokes.

Kids and beginners will also enjoy the Short Course because it does not demand great length off the tee. Posted rates on the Short Course are just $55 during the high season, a bargain in an area where greens fees are often $150 and higher, while the Long Course runs $115 through April 15.

Mike Augsdorfer has covered golf in the Palm Springs area since 1993. He has edited the DESERT GOLF GUIDE for the Palm Springs Desert Resorts Convention and Visitors Bureau, the Skins Game Program, the Diners Club Matches Program and CALIFORNIA FAIRWAYS (the official publication of the California Golf Course Superintendents Association). 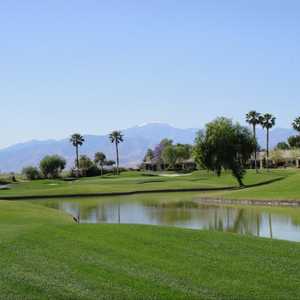 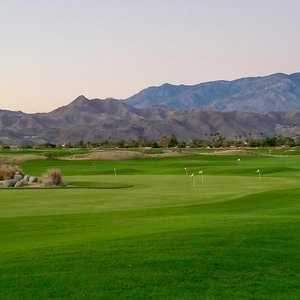