A good drive is critical to set up a reasonable approach on the long par-4 ninth at Eagle Ridge.
«

Nestled within the foothills that lie just next to Monterey wine country, Eagle Ridge Golf Club in Gilroy enjoys a stunning landscape with incredible views. The course takes advantage of the natural contours of the oak-studded hills, allowing them to dictate the placement of the bunkers for the maximum level of challenge but also utilizing the panoramic views offered by the dramatic elevations.

Gilroy, the "Garlic Capital of the World", was certainly never mistaken as a golf capital.

But in November, Gilroy opened Eagle Ridge Golf Club. At last a championship layout, a severe test of skill, that will surely be the host of competitive events in the future.

For a couple of years Watsonville resident Paul Orsetti made the drive by the golf course construction. Each time he viewed the signature No. 12 hole from the road he wished for the day he'd be on the course.

"I think there have been many golfers who have driven by for the past couple of year's just dreaming of the day they could be out here playing," said Orsetti. "I expected it to be a class course and a tough test and I'm not at all disappointed. I'll be back many times. The toughness of the course doesn't bother me at all. It only makes me want to improve and play it better. This is a golf course that is going to be heavily played from the Bay Area when the word gets out about it."

Director of Golf Scot Hathaway, a San Jose native, said "Gilroy has been hurting for a championship course of this quality."

"Eagle Ridge was not set up to be a tough course. The intent was for the big picture of a development and a very nice upscale housing community."

But Eagle Ridge is a tough test. The bunkering work is extensive.

Fream & Dale/Golfplan were the architects with consultation from Johnny Miller Design Ltd.

A par-72 at 7,005 yards from the back, Eagle Ridge was given lots of contour in the fairways. "You aren't going to see many level lies, but that contour makes the course more interesting," Hathaway said. Six teeing areas make this a winner for the short hitters, too. It plays 5,102 from the shortest red tees.

The historic ranch land property, located in rural foothills of the Diablo and Santa Cruz Mountains, has many mature live oaks, sycamores and manzanita plus the Ebas Creek running through the golf course.

"We wanted to make it look like a course that has been around a while and I think that's evident with all the mature trees," Hathaway said.

Don't be fooled by the start at Eagle Ridge Golf Club

Eagle Ridge Golf Club's easiest holes are No. 1 and No. 10, so don't be fooled by the start. No. 2 is a beautiful downhill par-3, 162 yards, with bunkers everywhere. No. 3 has bunkers directly in front of the tee box -- never saw that before! Guess it is for the chili-dippers.

There is a British Open-type bunker in front of the par-3, No. 6. If you fell off this green into the bunker you could get hurt. It is deeper than Shaquille O'Neal is tall. Watch out for the sucker pin placed right behind this mammoth pit.

Nos. 8 and 9 turn back into a hillside draw and are very tough. No. 9 is a par-4, 452 yards, and there is a ravine on the right side. No. 10 is a par-4 at 404 yards. You have to hit a perfect tee shot to have the best angle through a chute of trees and over a ravine on the second shot. The second shot is hard enough, but Miller placed a high-lip bunker 50 yards in front of the green. If you mis-hit the second shot a little that bunker will grab it.

Eagle Ridge Golf Club's signature hole, no. 12, has a lake all along the left side. It is 438 yards and a par-4. At this point you start climbing in elevation. From the 15th tee box you can look down on the entire length of the par-5 14th. The 15th is a target hole, only 330 yards. If you find the target you can hit a wedge on the approach, but the green has trouble everywhere.

Eagle Ridge G.C. is less than an hour away from other upscale daily-fee San Jose-area courses such as Cinnabar Hills, San Juan Oaks and Coyote Creek Golf Club. But no one thinks it is overkill. There's plenty of population in the Silicon Valley to support even more golf courses. 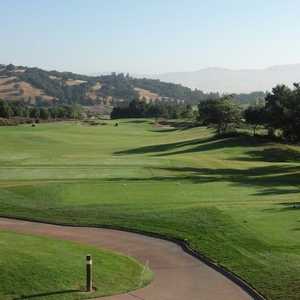 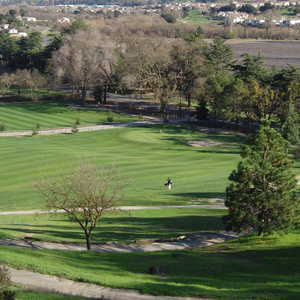 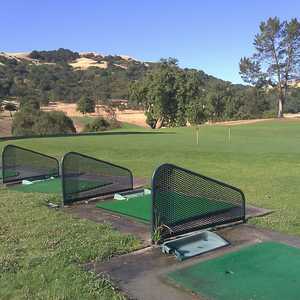