LAKESIDE, Calif. - The lady rarely takes her eyes off the slot machine's computer screen, even as she finishes a hearty two-course meal. One hand remains poised over the slot machine button, the other guides a fork to scoop up the last piece of salmon.

You've heard of multi-tasking. How about multi-task gambling?

This is what the Barona Valley Ranch Resort & Casino offers unapologetically with its tableside dining. Barona removes that troublesome play or eat debate for the serious gambler. At this sprawling casino/golf resort/spa complex on an Indian reservation about 35 minutes and another world away from downtown San Diego, you don't have to chose. It doesn't matter if you're playing penny slots or high-limit baccarat, they'll bring the food and the table to you.

It's a little unsettling at first sight, seeing all these little tables on wheels pushed up against slot machines. But plenty of people seem to love it.

"I get a good meal while I play my games,'' Rosie Carthorn said, enjoying her usual fish and slots. "I've got to watch my blood sugar, honey, and sometimes I get so excited about my games, I lose track of time and don't eat. This keeps me healthy."

Hard to argue with logic like that. It is even harder to debate the truth in advertising of Barona's "Where The Real Players Play" slogan (repeated at near ad nauseum on San Diego area radio by celebrity spokesman Kenny Rogers). Slot-side dining is just the start of the catering at this casino. You can also get your car washed and your oil changed while you play. That's right, Barona has its own auto center in the parking garage.

First-time visitors making the trek to Barona often arrive wondering what attracts all these people to a resort set back on a narrow two-lane highway that runs through mountainous, dipping roads. The drive can be a harrowing experience in rainy weather, made all the more trying by the gambling-eager folks who don't hesitate to ride bumpers. Yet you aren't on the grounds long before the lure becomes apparent. It is worth it for all these people to go out of their way because of the way they're treated when they're here.

Barona's staff - from the managers to the woman who cleans the table in the food court - do everything to make people feel welcome. You get that slot-side meal with a smile. It is apparent this staff is used to making high rollers feel like high rollers and low rollers feel more special than they usually do in real life.

No wonder Barona is one of the places Mark McGwire goes for his golf getaways. Big Mac's been out to Barona Creek Golf Club several times. On this day, head pro Don King has a signed picture of McGwire laying on his desk, waiting to be framed.

"He's really good,'' King said. "A near pro. He could almost play on the tour if he wanted to put himself through that."

With reports of McGwire increasingly retreating into golf to escape from the steroids controversy swirling around, no one would be surprised to see him out at Barona Creek again. The resort's relative seclusion tends to make it attractive for celebrities more interested in indulging their passions than being noticed. If Vegas is where you go to play and get recognized, Barona is where you go to play in peace.

This is where Sacramento Kings co-owner Joe Maloof won a $1 million invitation-only blackjack tournament and then infamously crowed, "The only thing that would make me happier is if the Kings won the championship."

Still for all its star attraction, Barona seems to understand a casino resort thrives by concerning itself with the average folks with five-figure salaries. Despite being ranked the 18th-best resort course in the country by GolfWeek Magazine, Barona Creek's green fees pale in comparison to some of the hefty prices charged in the San Diego area. The highest weekend fee is $100 and $50 rates are available after noon on weekdays.

The room sizes are equally generous. While there are high-roller suites as big as 3,354 square feet, even the regular rooms in this 396-unit facility are larger than your average hotel space. The bathrooms include a separate soaking tub and shower. Most of the rooms have a small balcony.

Yet there is little question, the games are the focus at Barona. Every casino card game you've ever heard of, and some you probably haven't, are available in the open gaming area. In a homage to golf's silly season, Barona introduced Skins Blackjack. Side wagers are placed between players with these skins carrying over every time there is a tie.

"Barona Valley Ranch is the only casino in the world to feature Skins Blackjack,'' Mike Paterson, director of table games, said.

Who else would think of it except the place that brings you a 20,000-square-foot bingo hall? Yes, even long-ridiculed bingo is treated with reverence at Barona. There are five sessions of bingo seven days a week at this retreat with jackpots running as high as $100,000. And you thought it was only for church basements?

"You can almost try and make a living playing bingo here,'' said Tim Capers of Lakeside, looking like he very much was going to attempt the feat.

So it goes at Barona. The history of the Barona tribe dates back hundreds of years. They were a migratory people used to moving where they pleased to make their own way until the U.S. government placed them on a reservation in 1891. Looking out from your balcony to the golf course and over their land, you get a sense of their great pride.

Of course, it isn't long before the clatter of the casino a few floors below is calling your name. History's fighting for recognition against a video blackjack machine with a lifelike computer-animated dealer here.

You're thinking of grabbing some dinner and gambling a little.

Not necessarily in any order. This is Barona Valley after all. 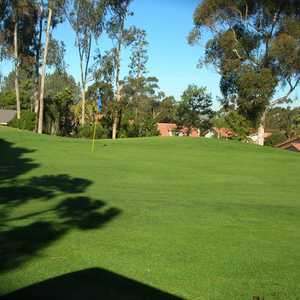