A Tree Moves at Pebble: Easier Said than Done

PEBBLE BEACH, CA -- Since Pebble Beach Golf Links opened in 1917, the 18th green, one of the greatest finishing holes in all of golf, was protected by a Monterey pine tree that had grown in size and stature over the decades. This tree forced golfers to make an important decision as to how to play their second shots. The 50 foot tall tree’s limbs would hang over the green, forcing a player to either flirt with the ocean if they wanted to go for it in two or call for a delicate placement of a lay-up shot to leave a good angle into the green.

When this famous tree finally succumbed to the ravages of lightning, old age, and disease last fall, The Pebble Beach Company began a search to find a suitable replacement for this wooden sentry.

Last week that challenge was met when a 67-foot tall cypress tree was uprooted from the first hole, hauled across the famous golf layout, and finally transplanted in the same spot as the lost relic. Incredibly, this entire process was completed in three days and never disrupted play at the No. 1 golf course in the world.

“I have been searching the Del Monte Forest for months looking for a tree with the proper size and profile. We soon realized the difficulty of trying to move a tree from a long distance away, and started to look closer to the course and finally settled on this cypress,” explained R.J. Harper, Director of Golf for the Pebble Beach Company.

Making a choice in a tree was only the beginning for this incredible project. Pebble Beach Company commissioned Environmental Design of Houston, Texas, a firm which specializes in the transplantation of large trees. Project Engineer Tom Cox, who has helped to develop the techniques to move large specimens, began to plan for this historic day six months earlier.

“We first did a careful study of the tree’s size, canopy, and root system and then made specific surveys of the new location where the tree would go to. It was important that the tree would be placed in a proper alignment to the ocean to ensure the trees eventual survival,” Cox explained.

The 30-foot wide, 5-foot deep root ball was then dug out and encased in a burlap and wire girdle two months before moving day. Then the real action began.

After first digging in two 12” steel I beams under the root ball, a series of 50-foot long, 7 inch iron drill casing was pounded under the tree with hydraulic hammers to create a steel bed to hold the tree.

Then Sheedy Crane and Rigging of San Francisco, a company that is more familiar with moving refinery equipment and bridge beams, brought in massive hydraulic jacks and an eighty wheel trailer in order to load up the 465,000 pound tree for the one mile journey to its new home.

It took a 500 horsepower tractor, a semi-tractor, and a forklift to pull the cargo along a roadway of plywood that over 50 pebble Beach employees created like they were flipping cards. In five hours this surreal procession buzzed along the 1st,2nd , 3rd, and 18th fairways.

All through this action, play continued on the course as players, who had waited over a year for the right to pay $350 at this famous course, watched in awe as the largest loose impediment in golf history passed by.

It then took another day just to get the tree settled into place at 18. As the jacks lowered the tree down, R.J. Harper breathed a sign of relief. The maintenance crews backfilled the tree with soil from the 1st hole to ensure the tree’s success, rebuilt the bunkers behind the tree, re-soded the areas affected by the massive equipment, and secured the cables that would support the tree all in six days.

With the cypress in place, the naked look around the 18th green has disappeared and this great golf hole’s defenses are once again in place. But those who play this great course in the future may never know the energy and excitement of this historic project at America’s greatest ocean course.

Doug Saunders has covered more than 20 major championships and his unique perspectives on the game have appeared in numerous publications including Golf World, GolfWeek, Golf Course Management, Golf Course News, Golfdom, and the USGA Golf Journal. He is a member of the Golf Writers Association of America, California Golf Writers, and the Sierra Nevada Golf Course Superintendents Association. 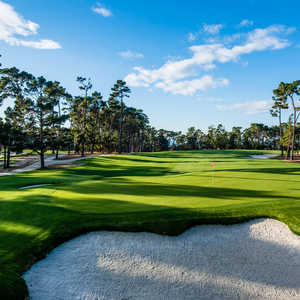