The course is on the Los Verdes point, about an hour's drive south of Los Angeles and just a few miles north of the nation's largest ports. It's also an easy drive up from Orange County and from either John Wayne Airport or Los Angeles International. The golf course is laid out below Palos Verdes Drive, allowing golfers and sightseers alike to take in the verdant view of the course, which juts out into the Pacific.

The grand Italian villa-style clubhouse welcomes guests with unparalleled views over the course and across to Catalina Island.

Even if you've never played Trump National Golf Club L.A., you may have deja vu. After all, TV shows "Entourage," "Revenge," and the 2014 season finale of "Modern Family" have all been shot on the grounds, not to mention a host of commercials.

Joe Lewis, Trump National L.A.'s head professional, offered a few tips before teeing off. The most important: "Everything bounces and moves to the ocean. You may think some holes go the other way, but it all goes to the ocean."

The fairways are protected by environmentally sensitive shrubs and bushes. The rough is kept longer; it catches the ball and keeps you playing (and from losing your ball into the brush or down a steep slope).

The highly regarded course -- Golf Magazine ranks it no. 5 among public golf courses in California -- plays 7,242 yards from the black tees to a par of 71. There aren't a lot of doglegs or hidden greens. Long ball strikers will do well, but as Lewis said, "You will need to putt well for that to translate. Pete Dye created some unique landing zones."

And dealing with the inclines on this plateau on the side of a steep mountainside makes putting an adventure -- especially for first-timers.

"If you are going uphill, double up," Lewis warned. "If going downhill, it's double-speed down to the cup."

It's definitely worthwhile spending extra time on the putting surface beside the clubhouse, even if you have to forgo time on the massive driving range.

Trump National Golf Club L.A.'s first tee goes right at the uphill slope to an elevated green with a manmade waterfall backdrop. This is the first "unique" landing pad, as shots that run through the green will run right into the water. There's also water below the green and a huge, sloping crater bunker for shots that drift left of the putting area.

The second hole plays near the highest elevation of the course, and you begin to see the switchback fairways of Dye's design as you look down at the greenways working down to the seaside cliffs. The parallel lines offer some unparalleled views.

Dye uses the tricky greens, water and brush to keep golfers on their toes as they soak in the sun and sights.

No. 2 is a fairly straightaway par 5, and like the other longer holes, it presents a birdie opportunity if you're able to work the greens, which proved as deceptive and tricky as Lewis promised.

There are some forced carries, including no. 5, which requires better players to hit over two ravines off the tee. The theme here, drive it high and tight and try to stay right. There's a fairway bunker and deep slope on the left side.

No. 10 is one of the Trump National Golf Club L.A.'s signature holes, as it plays along the water and around the bend from the bulk of the course. It has a long carry over brush and the cart path for all players, even the forward tees.

From the tee box you can see Terranea Resort up the coastline. Many of Terranea's guests travel to Trump after playing the highly rated par 3 course at Terranea. Trump's in-cart system offers helpful tips including warnings of blind spots as you drive towards the ninth tee and also tips players that the 12th hole has the most demanding multi-tiered green on the course.

The piece de resistance is the 18th hole, which Trump National L.A. officials say is the most expensive golf hole in history with a price tag of $64 million. That was the cost to re-imagine and redesign the closing hole after part of it slid into the Pacific.

It's quite a payoff for players as they climb the stairs to this green mesa that serves as a tee box for the back tees. It's a good place for players to pause, consider the sheer expanse off to the left looking out over the ocean, perhaps spotting a few whales in summer, and then back over lots of brush for the long carry to the fairway. The setting is especially dramatic for the last few groups of the day who tee off as the sun sets into the sea.

Just be prepared to pay up for the views and the experience. On a recent visit, one local golfer mentioned the green fees, which range from $160 for afternoons to $280 for early mornings, as a reason the course is more for "a special event, not a regular outing."

A co-ed foursome, coming off the course late that afternoon, marveled at their round.

"The views are stunning," said one of the men.

Diana Wolf, from nearby Long Beach, had won both nines, while switching partners at the turn. She was smiling after her round, upbeat with her experience. 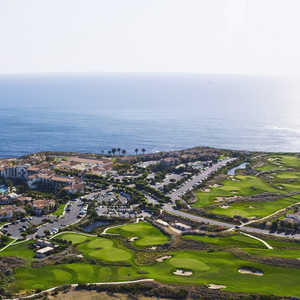 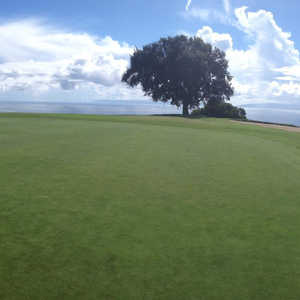