SAN CLEMENTE, CA - Fred Couples has achieved tremendous individual success in golf, which has enabled him to become part of a prolific and formidable team.

In the last few years, Couples and Brian Curley have collaborated on the design of several acclaimed golf courses, not the least of which is Talega Golf Club in San Clemente, which opened earlier this year and is a nominee for "Best New Course of 2001" by Golf Digest.

"With Talega, it was a great piece of property, and also there aren't many great golf courses in that area," said Couples, the 1992 Masters champion. "So doing something special there felt really good."

Talega traverses the rolling coastal foothills approximately three miles east of the Pacific Ocean above San Clemente, which was the home of Richard Nixon's Western White House before the Watergate Scandal brought down his presidency some 30 years ago.

Originally, the property was prepared as the site of an 18-hole championship course and an 18-hole executive course, but that all changed when Curley and Couples were brought aboard after Talega Associates bought the parcel of land.

"The new owners inherited what had been done and we had to work within that," said Curley, a partner in Schmidt-Curley Design Inc. of Scottsdale, Arizona. "We looked at every possibility before we decided we would try to create one great 18-hole golf course."

With 18 holes instead of 27 or 36, there are some generous driving areas on several holes, but there is plenty of trouble to be found at Talega. There are some intimidating forced carries over yawning crevasses, not to mention plenty of water to negotiate, and the numerous bunkers are filled with the same finely grained marble sand that is used at Augusta National, home of the Masters.

Talega plays to 6,951 yards from the back tees with a par of 72, but it's anything but a standard golf course.

"What is unique about the front nine is a stretch of holes where the par is 3-5-3-3," Curley said. "I didn't say anything before the course opened but when we had our opening and the media played it, nobody said anything. I guess they didn't notice."

"Those holes are the result of what we had to work with. We didn't worry about what is politically correct in creating a golf course. Cypress Point breaks all the rules and it is one of the best golf courses in the world."

Talega is another of those layouts that is actually like two golf courses. The front nine is where most of the creative work on the project was done. It has a lush, parklands or resort feel, winding through the upscale Talega Estates.

"Everything you see on the front nine was manufactured," Curley said. "There are no natural elements there. That was our creation. The back nine is exactly the opposite. Everything there was done with the existing terrain. We built on the lay of the land. We didn't touch the natural environment."

"The two nines are really a study in contrast. But that's exactly what we wanted to do, create two totally different environments. Many of the great golf courses have that and some, like those on the Monterey Peninsula, have the pine forest, the open linksland and the ocean crashing on the rocks."

Being a long hitter, Couples likes the par-five holes, and there are five of them at Talega including three on the back nine.

No. 6, the par five that is sandwiched between two par threes, plays 584 yards down the hill, with a stream running along the right side of the hole into a lake that guards the green. It plays as the most difficult hole on the front side.

Couples, on Talega's website, calls it, "a wonderful downhill, double-dogleg par five set along a densely vegetated riparian habitat of marsh and open stream." The tee shot plays slightly left-to-right to a landing area protected on the right side with both deep bunkers and wetland. A very forgiving left side offers the safety of grassed mounds but will demand a long and difficult second shot. Tee shots that flirt with the right side are subject to additional roll leaving the opportunity for a heroic second shot at the green.

"The greensite sits perched above a lake fed by the stream some 50 yards short of the green allowing balls to hit short and run in. Balls hit right are subject to either a deep grass low falling severely from the green or deep bunkering. The backdrop of the hole is a long view down the valley toward the coast offering a glimpse of the par-three seventh hole."

The 523-yard 15th, the No. 3 handicap hole and the last of the par fives, plays downhill and a good tee shot gives the golfer a chance to go for the green in two.

But there's plenty of trouble along the way.

"The tee shot sets up through a chute of oaks toward the oak-forested north face of an enormous natural hillside," Couples writes on the Talega website. "Those able to work the ball left-to-right will be rewarded with a significantly reduced second shot but must do so with the significant risk of a lost ball."

"The greensite is well bunkered and dangerously close to the natural canyon's edge. With the factor of the predominant wind in your face, the green becomes an even smaller target. Those brave enough to go at it will be rewarded following two well-struck shots."

The first two of the three par threes on the front nine, the fifth and seventh holes, require shots to greens that are guarded by large lakes. But Curley is most pleased with the other par three, the 161-yard eighth, which plays uphill to a green protected by a large grouping of steep-faced bunkers framing a devilishly contoured green. It is a visually demanding shot, with more room on the right than is visible from the tee. It's the shortest hole on the course but don't take it for granted.

"Everybody wants to talk about the other par threes, but I guess I am just enamored by uphill par threes," the designer said. "I think it's hard to make a really good downhill par three."

"The bunkering sets up so much better on the uphill holes. The slopes and contours make that a really good golf hole. It has a really nice look to it, with sweeping grand strokes. To me, it's just a very attractive hole."

Curley also has great affection for the first two par fives on the back nine. The 558-yard 11th hole which provides a sweeping view of most of the back nine, and the uphill 624-yard 13th, which is a bit of target golf with long carries over deep gorges on the first two shots.

"I like the feeling you get back there, that everything is big and grand," Curley said. "It's a natural, sweeping landscape. You stand on the tee at No. 11 and all the other holes unfold right in front of you. And it's a strong par five."

Enough with the par threes and par fives, which probably are the strength of Talega. But there are several strong par fours, including the most difficult hole on the course, the 461-yard 16th, which starts with a long tee shot over a canyon.

The course finishes with another dramatic par four with that double fairway, which plays 428 yards downhill to a green guarded by a lake on the left and bunkers right and left.

"You probably want to play the right side most of the time, but the left might have the best angle for your approach shot if the pin is in the back left," Curley said. "It's a nice downhill tee shot and will give you a chance to maybe make a birdie on the last hole. The green is perched right there on the edge of that water, making it a picturesque hole and a great way to finish."

Couples' credits also include the award-winning Lost Canyons Golf Club in Simi Valley, where he assisted the legendary Dye, and San Juan Oaks Golf Club in Hollister, which he co-designed with Gene Bates.

"We have worked together on a few projects now and I think we have it down pretty well," Curley said. "I know what he likes and what he doesn't, and vice-versa. We seem to be in agreement most of the time. It's great to have him come out and hit some balls during the construction phase so we can see exactly how certain holes are going to play. I think we're both pretty happy with the arrangement."

So are the golfers who play their courses. 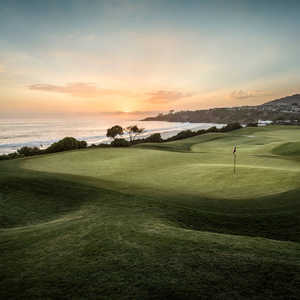