Rio Hondo Golf Club in Downey, Calif.: A hidden gem, but avoid trouble with the trees

DOWNEY, Calif. -- Rio Hondo Golf Club is a hidden gem for golfers in California's Southland area. The course offers a welcome respite from the bustle of nearby Los Angeles to the northwest or the Anaheim area to the southeast.

Located just minutes from LAX, Rio Hondo Golf Club is conveniently accessible from the South Bay and Orange County. Golf Digest has ranked the course as one of southern California's "Places to Play." The course features tight, tree-lined fairways and subtly contoured greens that are faster than they look. It's not a particularly long layout but the par 3s provide some good length. Golfers will face a variety of challenges throughout, but there is also plenty of scenic respite.

The lush, tree-lined fairways and gently sloping greens are a fairly well kept secret, but well worth the drive to this city course centrally located in Downey, about a 30-minute drive from millions of residents.

"It's a tight, well manicured course," Rio Hondo Head Professional Scott Wally said. "What you see is what you get."

While the course appears pretty straightforward and not the longest off the tees at 6,370 yards from the tips, Wally said it plays tougher than it looks on paper.

"Guys look at the card and think they'll eat it up, but they don't," Wally said. "If you get in the trees early (off the tee or on a second shot), it can be trouble."

Indeed, if you're hitting your tee shot straight you are in business on just about all of the narrow fairways, but if your aim is not true there will be trouble with the trees.

"It may seem pretty obvious, but on this course you really want to keep the ball in the fairway," Rio Hondo Director of Golf Steve LaBarge said. Aside from the thicket of trees demarcating most fairways, LaBarge said the "rough can get nasty."

"It's a golfer-friendly course but challenging, good for low to high handicappers," LaBarge said.

The range opens at sun-up and there are several pros on staff to teach lessons to all levels.

The original 1927 design got a major facelift in 1992. LaBarge said the muni went from a flat "cash cow" course to one with numerous contours that utilized the trees.

While there are more undulations on the course, LaBarge said don't read too much into that when lining up your putts.

"The greens don't break quite as much as they would seem to," he advised players on a recent round. The smooth, verdant putting surfaces were in good shape and balls were moving quickly across them on that visit. Course officials say the greens usually measure 9.5-10 on the Stimpmeter.

Rio Hondo's first hole sets the tone for the round and is indicative of what you can expect from the track. Down the right-hand side of the fairway off the tee is the double-decker driving range's net, while pine trees atop small knolls obscure shots that drift left from reaching the green in two strokes.

The second hole features a pair of one-tree hills built alongside a massive greenside bunker with a lip to catch low-flying chips from reaching the dance floor.

First-time visitors to the course should not only try to stay on the straight and narrow off the tee, but also beware of hidden water on both the sixth and ninth holes. No. 6 also has a sign to warn big hitters to back off the drivers if they aren't able to play a fade to the dogleg-right green.

As for signature holes, Wally singles out no. 9, with water running alongside much of the fairway to the green, and the half-island green on no. 17. The 17th is short and is the easiest hole on the course, but it's also one of the more visually appealing holes you'll find on a muni.

The par-3 seventh hole also offers quality views with a fun challenge as the green juts into the water 165 yards from the back tees. It requires a deft touch to land on the green for a birdie attempt, although less confident duffers can bail out with a shot staying left and chip onto the waterfront green.

The par-5 15th also has a surprise for golfers looking to make up ground for shots that carry left into or behind the trees separating this fairway from the one on the 13th hole. There's a bunker hidden below the hillocks collecting balls that fail to clear branches protecting the putting surface or shots that simply don't carry onto the green.

Overall, players say Rio Hondo Golf Club is a good value at just $41 a round for residents during the week, $51 on weekends and $52/$62 for the general public.

Amir Heydarkhan drove down from Los Angeles to play here.

"It's great golf for your bucks," he said. "It wasn't too hard, not too easy. It was tight, but then there weren't too many obstacles. It was a fun course." 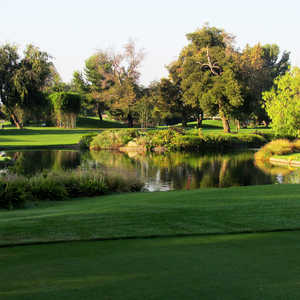 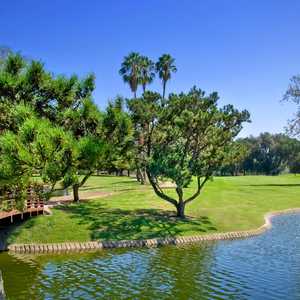 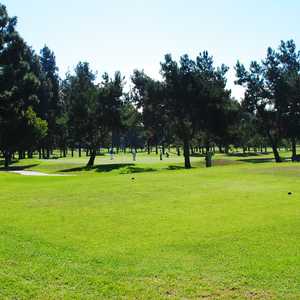