STOCKTON, Calif. -- Alex G. Spanos, the self-made man, has his fingerprints all over this central valley city. Considered Stockton's greatest natural resource, he's proved himself to be that valuable to this blue-collar city located between Sacramento and San Francisco.

Some 625,000 cubic yards of dirt were brought in during the construction of The Reserve at Spanos Park.
«

The Reserve at Spanos Park

If there is a worthwhile civic project in Stockton, chances are Spanos is behind it, which usually means a large chunk of cash arrives with this multi-millionaire's endorsement.

He's not only appreciated in Stockton, Spanos is well thought of in Sacramento due to his kindness and has been given the key to San Francisco. He's quite visible in the southern portion of the state as well, owning the San Diego Chargers for many years.

Now nearing his 80th birthday, Spanos has lived quite the life. Among his friends are Hollywood icons like Bob Hope. He's versatile in his associations, getting to know presidents and diplomats from various counties.

Like the legendary Hope, Spanos also became a lover of golf; it became his passion for many years. Spanos had a nice game for a long time, even representing the United States team that played in the British Amateur Championships in 1960.

Although health considerations now keep him from regularly visiting the golf course, that didn't stop Spanos from providing a nice municipal track in Stockton. The Reserve at Spanos Park is now three years old, serving as a good option for the city's golfers and also those of the surrounding area.

"Alex Spanos just loves this area; he's done so much for it," said Tim Walsh, the general manager of The Reserve, which is run by American Golf. "He was a very good golfer and really loves the game."

Although the layout at The Reserve lacks any spectacular features, it is a course that puts a premium on being first rate. Nothing is shabby here, which ranges from the service to the condition of the course.

"Mr. Spanos and his company have a high quality expectation," Walsh said. "We maintain the course to their standards. We feel like the course is always in great shape."

Course architect Andy Raugust was faced with challenges when he took on this project. The farmland was formerly cornfields, which still can be walked if you happen to hook a ball into out-of-bounds areas at certain holes.

Looking to alter the land's flat contour, there were 625,000 cubic yards of dirt brought in for this links-style course. Although still fairly flat, there are undulating fairways that make for some interesting lies at times.

The golf course, which goes 7,000 yards from the tips, is wide open at times, but does possess its share of trouble. Spraying the ball around won't work here. Twelve of the holes feature water. There are five lakes and two streams, so staying dry is a major consideration, especially on the back nine, which is more penalizing. Sand bunkers are everywhere, 55 of them to be exact. Many of the traps border the greens, where avoiding the dreaded three-putt can be a challenge.

"The greens are mostly undulating and fronted by bunkers," said Ryan Jones of Sacramento. "You can't just run a shot up to those greens, you have to get it there on the fly. And you better know the right spot to put it in."

The greens have actually been softened recently. Sticking a shot is no longer a major challenge. Putting is a bit easier as well now that the speed has been reduced.

"Everyone likes lower scores, so we have softened the greens up a bit," Walsh said.

Another challenge often arrives at The Reserve and this one cannot be addressed. The afternoon winds from the nearby Delta waterways often whip through the property. Dealing with the wind certainly hikes up the degree of difficulty.

Depending on your perspective, the green fees are either a deal or a bit high. For Bay Area residents, where a round of golf can be costly, however, playing The Reserve is a nice bargain.

"This course has great value if you're a golfer from the East Bay and we're not very far from there," Walsh said.

Suburbs of Sacramento like Elk Grove and Laguna Creek are not too far away, either. Yet a 45-minute drive is nothing Jones would do too often, considering the many golfing options in Sacramento.

"It's not a course I want to drive 45 minutes regularly to go play," Jones said. "It's a nice course, a fun course and if it were around 15 minutes away I would play it more often."

If on your game, this is a track that can be mastered, especially from the middle tees, which go 6,550 yards (6,060 yards from the forward tees). There are generous landing areas on most holes. Keeping the ball out of the bunkers and water is the obvious key.

What is nice about The Reserve is the holes vary in length. The shortest par-4 arrives at the first hole, going just 327 yards from the middle tees. Don't get too comfortable, because that is followed by the No. 1 handicap. The second hole goes 528 yards and has water down the left side and trouble to the right off the tee.

The seventh hole is another challenging one, a par-4 that measures 408 yards. It is one of the course's tighter holes, with traps situated to the left and water on the right with the second shot.

Be careful on No. 9 as well. A large lake separates the ninth and 18th fairways, a pair of par-4 holes that both go around 400 yards.

On the back nine, the 12th is an interesting hole. There is one of several waste bunkers down the left side. But the gambler might want to head over the edge of it, shortening this 363-yard, par-4 hole.

There are no real must-play signature holes at The Reserve, which does prevent the course from being considerable a notch above some other public tracks. However, the 17th is a good one, rated the second toughest.

"There is water right and if the wind is blowing you almost have to aim your shot at the water," Walsh said. "I think it's our toughest hole." 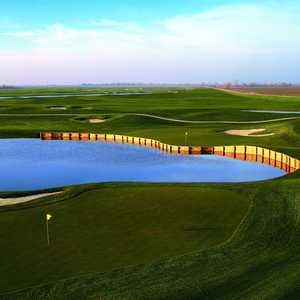 The Reserve at Spanos Park
Stockton, CA
Details Book from $20 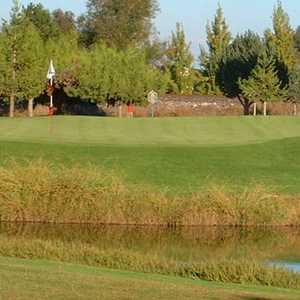 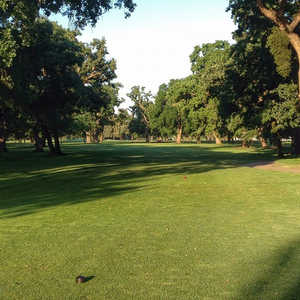