Since Escondido is about 20 miles from the Pacific, Reidy Creek might be the best 'inland' par-3 course in California
«

Olson was asked to design Reidy Creek Golf Course, an upscale par-3 course on about 65 acres of rolling hills and parkland in rural Escondido that is owned by the City of Escondido and managed by JC Resorts. The course opened to the public on July 1, 2002.

"Our vision and our goal was to create 18 par-3 holes that were memorable," said Olson, whose company, Cal Olson Golf Architecture, is located in San Juan Capistrano, Calif. "We believe we have achieved that goal."

"The first thing you need to know is that this is not a par-3 course as most of us think of a par-3 course. We wanted variation and challenge, and didn't want any holes that were flat and mundane. The greens are contoured and the bunkers are what you find on any championship course."

"We hope Reidy Creek is as much fun to play as it was to design."

Reidy Creek is perhaps California's answer to the Threetops Course at Treetops Resort in Gaylord, Mich. Lee Trevino once collected $1 million for making a hole in one at Threetops in the Par-3 Challenge, a made-for-television event shown on ESPN.

Reidy Creek's competition for best par-3 course in California might come from the Peter Hay Course at Pebble Beach, designed by Hay and opened in 1957, and the Cliffs Course at the Olympic Club in San Francisco, designed by Jay Morrish and Tom Weiskopf, which opened in 1994.

Since Escondido is about 20 miles from the Pacific Ocean, this might be the best inland par-3 course in the state.

But this is something entirely different.

"We have always designed championship courses that are 7,000 yards long," Olson said. "This was our first par-3 course. We had to make some adjustments with such a small piece of property to work with."

"But we will put this course up against any other par-3 course around."

Reidy Creek Golf Course, which includes several water features and dramatic bunkering, measures 2,621 yards from the back tees and plays to a par of 54. There are three sets of tees and you get the long and short of Reidy Creek on the 195-yard 14th, named "Roller Coaster Part II," and the 90-yard 15th, called "Short and Sassy."

Pat Thomas, director of public works for the City of Escondido, served as the city's liaison to the project, overseeing the engineering, utilities and maintenance.

Thomas, who said he is about an 18-handicapper, had an opportunity to play the course before it opened and registered the first hole in one when he knocked his tee shot with a nine iron into the cup on the 133-yard fourth hole, called "Hilltop," because it is perched on a ledge from which the golfer has a view of Escondido.

"I hit it pretty good and it tracked right to the flagstick," said Thomas who claimed his first ace. "The ball mark was almost right next to the hole. A couple more inches to the center and it might have gone in on the fly. I've seen some other holes in one, but never on the fly."

"I was kind of stunned actually. The closest I've every come to a hole in one before was two or three feet. I think for most people who make one, it's a once-in-a-lifetime experience. It was really a surprise to me but it's fun to say I've done it."

"This is a beautiful golf course. It has everything you get from a championship course except distance. I think there are going to be a lot of holes in one on the course because every golfer who plays here gets 18 opportunities."

Thomas apparently was right since there were five more holes in one during the first 10 days the course was open to the public.

Probably the most memorable hole at Reidy Creek is the second hole, which is called "Peninsula." It plays downhill from between 88 and 135 yards to a green that is surrounded by water except for the left front, which allows the golfer to hit his tee ball short and let it bounce onto the putting surface.

"If you miss, it has to be left because anywhere else and you are in the water," said Jim Stull, head professional at Reidy Creek and formerly an assistant pro not far up the road at Temecula Creek Inn Golf Resort in Temecula.

"If you pick the right club and hit a good shot it will put you in birdie range but that's difficult because it is downhill and there are so many slopes on the green. Even if you hit the green, it can be tough to make par if you are on the wrong side."

No. 8, which ranges from 120 to 166 yards, is the most difficult on the front side and is called "Beachfront," because it is surrounded by six bunkers and a wetlands area.

The two-tiered green slopes gently from back to front and the back right pin position can make it particularly tricky to get the tee shot close to the hole because the putting surface narrows and a creek waits for any off-line shots.

"That's another green you just can't afford to miss because there is no safe place, other than short," Stull said. "If the pin is up front, you can bounce it onto the green, and if it's back you have to land the tee shot on the front of the green and hope it gets all the way back there."

"It's very narrow back there and the wind usually blows from left to right, but you can't always feel it because it's blocked by the houses on the hill left. It's a very dangerous hole."

The longest hole on the course, the aforementioned No. 14, plays uphill and longer than the yardage to a massive double green shared with the 12th hole, "Roller Coaster Part I."

Ridges on either side of the fairway leading up to the green create a collection area at the bottom of the hill for shots that don't quite make it all the way to the three-tiered green, which also is protected by a large waste bunker on the right and traps on both sides.

"The first thing you have to do is knock your tee shot onto the green," Stull said. "Most players, from 195 yards, you just want to be up there somewhere. You can worry about placement once you get there. Because it's so big, it can be a two- or three-club green."

"Once you get the ball on the green, you might have a 50- or 60-foot putt. It's a hole that presents you with a lot of problems on the tee and the green."

Olson saved some problems for the finishing hole.

No. 18 plays from 111 to 167 yards and to a green that is flanked by a lake that is barely visible on the right and the creek on the left. A pot bunker, unseen from the tee, guards the left side of the green and leaves only a narrow opening for a shot that comes up a little short.

"The tee shot has to be very precise because there, it is so narrow at the front of the green," Stull said. "It's a little bit wider in the back but there is water on both sides to take anything that doesn't hit the green."

"The pot bunker catches a lot of shots and people who think their ball is safe are surprised when they get up there."

Two other tips: Watch out for the false front with a forward pin on No. 3, called "Uphill," because the 96- to 170-yard tee shot is to a dramatically elevated green, and the 76- to 166-yard 11th hole, "Creekside," plays shorter than the yardage because it is downhill across a creek and wetlands area.

But Reidy Creek offers the golfer something those outstanding championship courses can't: 18 chances for that elusive hole in one. 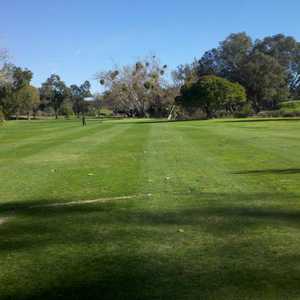