For years, Palm Desert Country Club stood out as one of the biggest eyesores in the entire Coachella Valley. Now? It's one of the better-conditioned golf courses in the whole Palm Springs region, and it still features affordable green fees.

Take out the driver and fire away at all that green from the first tee at Palm Desert C.C.
«

PALM DESERT, Calif. - It's green. Very green. So green in fact that the annoying guy in every neighborhood who would probably kill to have the best lawn on the block, the guy who's triggering the sprinklers at 5 a.m., would grudgingly take notes here.

That's not so remarkable in Palm Springs, the desert region two hours from Los Angeles in which greenskeepers wage a virtual arms race in course conditioning. But it's downright miraculous at Palm Desert Country Club.

For years, this course stood out as one of the biggest eyesores in the entire Coachella Valley. Now? It's one of the better-conditioned courses in the whole region, and it's still very much a budget play.

Not after developers Larry Kosmont and Randy Case pumped $12 million into Palm Desert to bring a course that was all but dead back to life. That sounds like a lot of money, until you consider that some course restoration projects come in at $60 million.

Kosmont is rightly proud of what was pulled off on a budget at Palm Desert, and the company is refreshingly open about what conditions were like before. "By 2004 the fairways were essentially dirt and weeds, with the clubhouse on the verge of condemnation," an official press release from the course reads.

The course also includes before and after photos on its own Web site.

"I'm sort of blown away by how it looks now," said Tim Hurja, a Palm Springs golf packager and former head pro in the region who'd heard the horror stories. "I knew it would be better. I didn't expect it to be this nice."

The best thing about Palm Desert Country Club now is you don't have to know its prior history to appreciate it. Step onto the first tee, see all the open green stretching out ahead of you, and you're just pumped to let your driver fly.

There are a ton of drivable holes, not many palm trees in your way, lots of flat ground and a few interesting water looks. This is a great talking course, a track where you can shoot the breeze with your buddies while no one gets all that stressed.

This isn't a course where the staff is going to get all hoity toity if a hacker is smacking it every which way but forward. DeLorey talked proudly about a women's group that had averaged a 162 score on another course a year earlier getting their average score down to 122 at Palm Desert.

Growing the game and getting more people involved in golf is not mere lip service at Palm Desert C.C.

"I don't feel like they're looking down at me here, even though I'm not that good," golfer Amy Spitzle said.

You don't have to be good to enjoy the ninth hole. This short par 4 doglegs by a man-made stream with big rocks and two levels, up to a green guarded by two crater sized bunkers on either side. No. 17 is an even better water visual, with a forced carry over the drink to go for a green that just screams for you to abandon caution (the par 4 is 314 yards from the back tees).

No. 18 brings the water fun to a fitting close with a sharp dogleg around a lake that juts into the green right near the tees and an even closer look at that water on the way to the green.

Palm Desert Country Club has been transformed from a course to avoid at all cost into a great Palm Springs-area value with its $75 high season greens fee. You don't have to play Palm Desert C.C. to feel like you've experienced Coachella Valley golf.

It's not a PGA West TPC Stadium, Pete Dye's Mountain Course or even future PGA Tour site SilverRock. And it's not priced like any of those high-end plays, either.

Palm Desert C.C. is a good course to fill out a Palm Springs trip. It's a great change of pace if you've been playing the area's monsters - Pete Dye and otherwise. For one afternoon, you'll have the chance to swing bold and talk easy.

The hardest part of Palm Desert C.C. comes in the fourth, fifth and sixth hole stretch; after that, you're free to go for a low score.

The best part of the renovation is that you'll never notice it if you haven't been here before. If you don't see the before and after pictures, this just plays like a good value course. That's what Palm Desert Country Club is.

It's actually one of the older courses in the Palm Springs area, having been built in the early 1960s. You'll never know that, either, by how new everything looks now.

Rancho Las Palmas is an underrated resort in Rancho Mirage that gives you that retreat setting while being in the heart of it all. In this case that means right across the street from The River, the outdoor mall with an actual flowing water body that people in the desert swoon over. Even better, it's close to the high-end shops of downtown, including Tiffany.

Best of all is a pool scene with shooting water streams for the kids and plenty of nanny babes lounging around in hardly anything.

Palm Desert C.C. also has a nine-hole short course where the par 3s are actually the type of par 3s you'd find on a regular golf course. 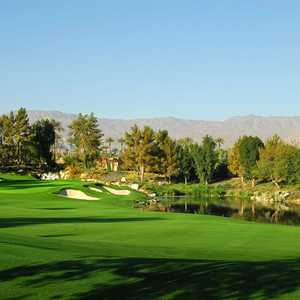