Indian Springs starts over: The old is new at La Quinta

LA QUINTA, Calif. -- The rebirth of a golf course can come one of two ways.

The first is to upgrade an existing layout, reworking greens, adding bunkers and upgrading the conditions and atmosphere of a course that is already on the ground. Then there is the method used by the new owners at Indian Springs Golf and Country Club. They simply plowed up most of the old layout and started from scratch.

Once a forgotten course on a road that was nothing more than a shortcut from Interstate 10 to the most prestigious courses of the eastern end of the Coachella Valley, Indian Springs has risen from the oblivion of bare fairways and rock-hard greens.

"I used to tell people there are 102 courses here, and we were in the top 100," laughed Neil Finch, general manager at Indian Springs. "When you have done what we've done, you can laugh about it."

Finch now oversees a course that is the centerpiece of a 726-home development. The new Indian Springs retains just three holes from the old layout. The 15 new holes utilize water, bunkers and lush landscaping for a golfer-friendly experience that will quickly erase memories of the course that once existed on the land that straddles the city borders of La Quinta and Indio.

"For people who played the old golf course, it's like 'Wow.' But really, I would have people think of this as a new golf course," Finch said.

The renaissance of the course began when developer Roger Snellenberger bought Indian Springs and some surrounding undeveloped land in the late 1990s. The only remnants of the old course are a triangle of holes that once played as the 13th, 14th and 15th holes of the course. Those three holes are now the starting holes for the back nine, and even they have been renovated with new greens and added bunkers.

The rest of the course was completely redesigned by Dave Ginkel of Golf Design Unlimited. An area that was once the final three holes of the back nine was expanded into the final six holes of the course. The second through eighth holes are also completely new, following different routing and working their way through generous corridors between some of the new homes. The first tee and the ninth green are all that remain of those holes.

Finch said the entire process required moving 1.5 million cubic yards of dirt to transform the course from a place people played because it was cheap to a place people wanted to play.

"For the good golfer, it is a test, even though it only play 6,741 yards," Finch said. "This course takes it back to the past, with small greens, good bunkering, and it's user friendly. There are eight lakes on 11 different holes, but they are not right up in your face."

The second hole is a good example of the changed character of the course. A 400-yard par-4, the hole requires a second shot with a long iron or fairway wood to a green protected by water to the left and bunkers to the front and right. The No. 1 handicap hole from all three sets of tees, the second hole is far more challenging that anything the old Indian Springs had to offer.

"It's an exacting hole. The green is kind of shaped like No. 12 at Augusta National," Finch said. "You're just trying to get it on the green somewhere."

That hole is immediately followed by the 233-yard par-3 third hole, where a large green helps golfers compensate for the length. It's one of the few big greens on the course, and the smaller targets demand accuracy with longer clubs from players.

While four of the par-4s are under 375 yards, the par-4 16th, at 441 yards, is a hole where the small target and long approach shots with long irons and woods can create a challenge for average players. The green pitches from back to front and from right to left, and one of the new lakes borders the right of the green.

"If you get it above the hole, and you are hitting a long irons there, you've got your hands full getting close to the hole on your first putt," Finch said.

The closing 18th, at 556 yards, generally plays with the prevailing wind of the desert with at the players back or slightly from right to left. The risk-reward of a daring second shot to the green comes from the lake near the putting surface just in front of the site of the new clubhouse, expected to open in January 2004.

While the course is a drastic change in difficulty and in conditioning from the layout that was once had the land, Finch emphasizes Indian Springs is not overly demanding.

"We went away from the norm that a lot of people were going to in the 1980s and 1990s; what I call the killer course," he said. "It's more user-friendly. I think golf needs to get back to a game of enjoyment, instead of the sadistic how-badly-can-I-beat-up-on-myself course."

Other attractions in the Palm Springs area

Among the possibilities are shopping on El Paseo Drive in Palm Desert or taking the 8,000-foot ascent on the Palm Springs tram. There are hundreds of motels and resorts in the Coachella Valley. One possibility: Marriott Shadow Ridge at 9003 Shadow Ridge Road in Palm Desert. Phone: (760) 674-2600. Web site: marriott.com. 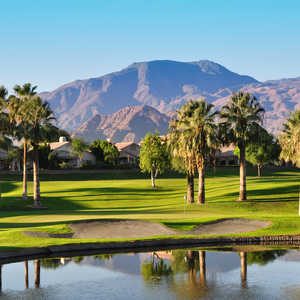 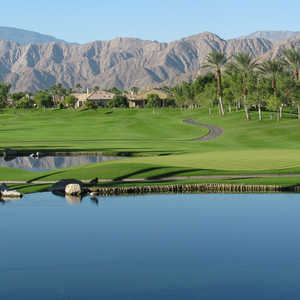 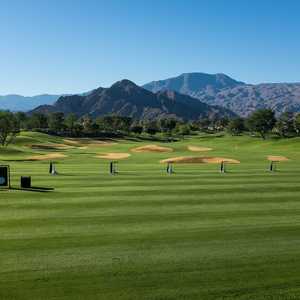