Horses but no horse track: Indian Canyons Golf Resort for everyone

PALM SPRINGS, Calif. - Setting up to take a shot, you suddenly hear a steady clomping sound. It sounds like it's getting closer.

A blonde on a horse might be part of the scenery at Indian Canyons.
«

Nestled at the base of the San Jacinto Mountains, Indian Canyons Golf Resort offers two championship courses with stunning views. The two golf courses, North and South, have completely different layouts but they are both sheltered from the wind thanks to the surrounding mountains. The South Course is the shorter of the two, making it the more player-friendly course. That is not to say it is not a challenge though.

Indian Canyons Golf Resort boasts two championship courses, the North and South. The courses are surrounded by the San Jacinto Mountains, providing scenic views while also sheltering them from the wind. The North Course is the longer of the two. It has a classic layout that was designed by William Bell. Thousands of trees blanket the course, including palms and olive trees as well as several varieties of native trees.

A construction Teamster with a jiggling belly? Jason of Friday the 13th fame dragging a bum foot from his 15th resurrection? A marshal with a flat tire?

Coming into view just over your shoulder are four horses moving up a dusty trail that runs along the 12th fairway at Indian Canyons Golf Resort. You smile at two women - obviously city slickers getting a horse tour into the mountains - and turn back to the golf coruse and your 3-wood.

Tiger Woods' caddy, Steve Williams, might have run up and clothes-lined the blondes off the horses, but average golfers are likely to enjoy the experience.

There's something to be said for playing on a course that's scenic and mountain-snuggled enough to be a point on the horse trails.

This is Indian Canyons at its best. It's a classic Palm Springs course, with its green, almost Midwestern fairways, mountains in the near background and houses crammed in here and there.

And a picturesque stretch of the back nine where horses roam. Okay, horses with stirrups, but still ...

This is one of the more popular courses in the Coachella Valley, and it's easy to see why. Indian Canyons is reasonably priced ($95 high season), in good condition and very hacker-friendly. It was laid out by a little-known California architect named Casey O'Callaghan with design input from LPGA Hall of Famer Amy Alcott.

It does seem to have something of a woman's touch. Indian Canyons doesn't rely on sheer distance or try to
intimidate anyone. Its longest hole is the first one, a 547-yard par 5; the other four par 5s are all under 526 yards, and five of the par 4s are less than 392.

You're going to have a chance to reach some greens.

"There are nice, drivable par 4s," local golfer John Bouie said. "I won't play any of those courses with 600-yard par 5s. This is more than enough for me.

"It gives you a fighting chance."

If you want to forget about life for a little while, not stress too much over club selection and just hit some shots, Indian Canyons is a good choice. Everything is sort of languid here. The holes are close enough together to encourage walking (though few golfers do so).

The popularity of the place makes it a sure thing that you'll have plenty of time to linger, waiting to tee off. Too much time for some.

"Every hole is like a root canal," Bouie grumbled as he waited in the middle of another fairway to take another shot.

In truth, we finished our round in a semi-reasonable four hours and 30 minutes. It just seemed longer, cooling your spikes before so many shots. You could have read War and Peace during some of the pauses.

Better, though, to spend the time enjoying being outside on one of Palm Springs' seemingly never-ending stock of 70-degrees-and-sunny days.

"I'm just glad to be out of the office," said Bouie's buddy, Fred Molo.

Spend your days out on Indian Canyons - pretty enough but not too pretty to steal all your attention, tough enough without really being tough (118 slope rating even from the back tees) - and your blood pressure could drop.

Seven of the holes have water features, including the mountain-framed par-3 third. But even with four lakes, none of these water obstacles is particularly knee-knocking. Many times you're skirting around water or just glancing it on the edges of wide fairways.

That's the thing about Indian Canyons: It gives the illusion of danger without that pesky real danger.

The big bunkers are the biggest true obstacles. They're not particularly deep and you can get up and down out of many of them with a decent lie, but O'Callaghan and Alcott seem to place them in just the right spots to snare your ball.

Those bunkers, and greens that kick off approach shots and can roll tricky, are your chief tormentors. Though we're not talking Iditarod-tough.

Indian Canyons is nothing if not well-mannered.

Even the horses kept the racket to a minimum.

Indian Canyons is a good course to play when you want a laid-back day. The scenery is not overly spectacular by local standards but it's plenty good for Midwest or East Coast non-desert regulars. There are more than 850 palm trees spread out over the course, and No. 12 truly skirts the mountain.

The front nine is a bit more crowded by houses, but the back nine is less developed (though there are signs of more construction on the way). On No. 15, a mountain-shadowed par 4, the houses seem to blend into the peaks. Maybe they're getting better at disguising these frequent intrusions.

Indian Canyons is a very drivable course, especially from the second, teal set of tees that most golfers play from. (Is teal really the color you want for your second tees?) It's 6,305 yards from the teals, 6,582 from the back blacks.

Overall you're not going to wish you were on the horse instead.

Indian Canyons is quick a five minute drive from downtown Palm Springs and the plethora of restaurant choices along the Palm Canyon Drive corridor. Park the car and walk from place to place, browse the menus outside and then make your pick. Selecting the restaurant is part of the fun here.

There's something for almost every taste, from chains like California Pizza Kitchen to Kalura Trattoria Italiana, an open-air place next to the Plaza Theater with authentic, tasty pastas and desserts. If you're looking for seafood, head one street over to Fisherman's Market & Grill on South Indian Canyon Drive. This is a higher-end West Coast chain with good if not great fish. Remember, this is the desert.

Back on Palm Canyon, Kaiser Grill is a universal favorite. The big salads are particularly tasty. Skip the pizza and go for the meat dishes.

If you want to be close to Palm Springs and its run of shops and restaurants, the Palm Springs Riviera (760-327-8311) is a very underrated choice. Its two-room suites, complete with private outdoor Jacuzzi, are some of the plushest accommodations you'll find in the whole Coachella Valley. This is where Dennis Rodman stayed when he was in town for a book signing.

The standard rooms aren't nearly as luxurious as the suites (even the carpet's different), but they are clean, with a great location (one block from Palm Canyon Drive) and a big outdoor swimming pool/courtyard area. Plus there are free pool tables in the open space just off the lobby. The Riviera is one of the most historic hotels in the area and you can see its Bob Hope/Elvis connections proudly displayed in photographs along the walls.

Hotel Zosa, a new would-be cutting-edge boutique hotel, is drawing almost all the publicity in downtown Palm Springs right now. The Riviera is a much better deal and in some ways a more satisfying stay.

Indian Canyons is affiliated with the nearby Native American casino Agua Caliente. It offers a number of packages for multiple-round play. 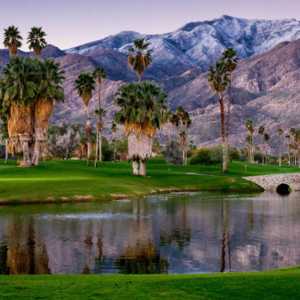