SAN FRANCISCO -- With The Golf Channel getting decent ratings for "The Big Break," will be it long before they delve deeper into the bottomless pit of reality TV? How about a prime time line-up of shows like The Real World of Greenskeepers, I Want to Caddy For a Millionaire, and The Average Hacker (where Annika has to choose a playing partner from a cast of high handicappers). A bit more realistic might be "Extreme Course Makeover," where old, beat-up munis get an injection of cash and tender loving care, turning ugly ducklings into revitalized beauties.

It happened at New York's Bethpage Black, site of the 2002 and 2009 U.S. Opens, and at Torrey Pines in San Diego, which will host the 2008 U.S. Open. But they've already received enough attention. The debut episode should instead feature the stunning makeover of San Francisco's Harding Park.

Originally opened in 1925, this Willie Watson design had deteriorated badly over the years. Yet that didn't stop Bay Area golfers from trekking over to the west side of the city, having breakfast at Benny's in the old clubhouse, and then playing from dawn to dusk year-round. But the poor conditions drove everyone nuts, and pushed one particularly influential local resident to action.

Former USGA President Sandy Tatum, a San Francisco attorney, was determined to restore the course he had played countless times to its former glory. He worked with former San Francisco Mayor Willie Brown and Recreation and Park Department General Manager Elizabeth Goldstein to navigate the lengthy process of obtaining city approvals to go ahead with what turned into a $16 million renovation. Tatum also played an integral role in obtaining a crucial commitment from the PGA Tour to hold a future event at Harding pending the renovation and construction of a new clubhouse.

"My role as I saw it was to make sure that while we created a professional venue and preserved the basic elements that make Harding so special," said Tatum, whose memories of playing Harding date back to his participation in the 1939 San Francisco City Championship held there. "That was easy to do with someone as responsive and perceptive as Chris Gray."

Gray, who has worked for PGA Tour Design the past 14 years, recognized immediately that decades of deterioration would mean a complete overhaul of the course. "I've done a lot of renovation work before but never on a facility that was so run down. But it really was a diamond in the rough. You saw what it could be."

He gave the layout what he calls a haircut, clearing many trees and trimming others, while incorporating subtle grading changes moving dirt around to add some character to formerly lifeless fairways.

"The old course is still there in a sense, but it was resuscitated in many ways that make it so much more appealing," said Tatum. "One of the main things that happened was that it was opened up through a lot of tree removal, so that you get the sense of Lake Merced nearby and of the environment. It has an aesthetic feel now with all of the cypress trees."

The flow of Harding's routing remains essentially intact, with the front nine encircled by a back nine that loops around the outer reaches of the property. "Something happens with the second shot at 13," says Tatum. "You' re now in another environment, and those holes coming in are each very special in their own way." Indeed. The last five holes are outstanding, both for the scenery and the strategy required.

In fact, the biggest single change was on the 18th, where the new tee was put back across Lake Merced into what was an old parking lot. The fairway was reshaped, a ravine was brought into play, new bunkers were added, and the green site was moved to where the old practice putting green was located.

Gray, who expects a number of PGA pros to check out Harding during the upcoming, season-opening West Coast swing, calls Harding "easily the most satisfying job I've ever done."

Harding Park General Manager Steve Schroeder describes the difference between old and news as night and day. "They really put life into what I call the features, which are the tees, greens and bunkers. The 18th used to be a hole without an angle off the tee and the ravine didn't really come into play. Now with the tees staggered even more than before, the angle is much sharper. That really catches people's attention. The other hole to look out for is the 13th because the green was pushed back and to the left a bit. It used to be down in a hollow with a bunker and sloped from left to right. I think the bunkering there now is just about perfect."

Schroeder, who grew up in the area and played on the Stanford golf team, just shakes his head and laughs sometimes when he thinks of what the renovation has done for Harding. "When you drive around now and see what it has become, you have to give a lot of credit to all the people responsible for the renovation."

Naturally the glamorous makeover created quite a buzz when it officially debuted last August, and tee times are not easy to come by. Approximately 20 percent of advance tee times are available to non-residents for an extra $10 fee (green fees range from $76-$88, with lower twilight rates available). Another 10 percent of those advanced tee times are reserved for local residents (resident green fees range from $33-$45). There's also some stay and play packages being offered in conjunction with area hotels (see Stay and Play for more details).

"Any old-time Harding person will recognize that he's on Harding Park," said Tatum. "But at the same time he'll be having a quality experience which he wouldn't have imagined possible on that golf course. I think it's one of the best golf experiences you can have playing anywhere. I'll stack it up against any public golf facility in the country."

Feedback from locals has been positive too, according to Brian Murphy who covers golf for The San Francisco Chronicle. "The general feeling, and it's nearly unanimous, is that the spirit and core of Harding has been retained entirely. The renovations involved almost no changes to the essence of each hole, and only the 18th looks dramatically different -- much better, most think."

Even in its old battered condition, a tee time at Harding was never a sure thing. And the same holds true for the new version. Murphy knows why. "Both the new and old Hardings are extremely playable, which is why the place is so beloved. Pure golf. No gimmicks. No nonsense. No barranca, target golf or ridiculousness. Just a traditional golf course."

And one that will surely see some new scoring records. "The biggest differences are the greens," said Murphy. "What were once entirely flat and poorly kept greens are now beautifully maintained, subtle and much bigger, featuring a whole new world of pin placements. I'd say most people feel they can score better at the new Harding -- you get better lies, truer rolls, etc."

The first true competitive test of the new Harding will come during the 88th annual San Francisco City Championship, the oldest municipal event of its kind in the country. It runs from February 13 through March 7, with some of the qualifying rounds and the match play finals being held there. And if the planned 15,000-square foot clubhouse is completed by summer 2005, look for Harding to host the AMEX World championship in October of that year, serving as a test run for potentially hosting the PGA Tour Championship the following year.

The makeover has been so well received that whispers of hosting a U.S. Open someday, a la Bethpage and Torrey Pines, could be turn out to be more than just sweet nothings. Adding to the intrigue is positive praise for the renovation from current USGA president David Fay, who visited the course last fall. While sites for the national championship are already booked through 2009, this rediscovered beauty should be more than ready for a close up, and its own show, come 2010.

Also receiving the benefits of the renovation process was the 42-year old, nine-hole Fleming course, named after Jack Fleming and affectionately referred to as Harding's little brother. Encircled by the Harding course, it's a great deal with a greens fee from $16 to $22, depending upon residency status.

As an Associate Editor at GOLF MAGAZINE for three years, Tom Mackin wrote about golf destinations in the United States, Mexico, Scotland, Ireland and Australia. 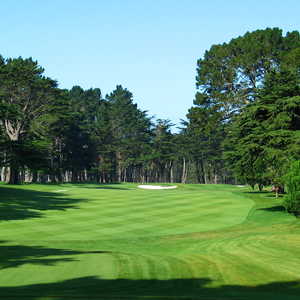