ANGELS CAMP, CA - This is where the frogs annually take their leap. At least that is one of the first thoughts when the topic turns to historic Angels Camp.

Who could blame people for associating the two. The Calaveras County Jumping Frog Jubilee was popularized by a Mark Twain short story. Nearly a century after Twain's death, the event still takes place the third weekend each May, continuing to tweak the curiosity of many, a day that can definitely turn back the clock.

For the record, Rosie the Ribiter still owns the longest jump. Talk about some hops. Rosie definitely had them, going 21 feet, 5¾ inches back in 1996. Lee Guidici brought Rosie to prominence that year and did the same in 2001 when Greenback Packer went 19 feet, 3¾ inches. That brought Guidici a tidy sum of $5,000. Let's hope the effort at least got Greenback Packer a decent meal that evening.

While nothing this area ever produces may rival the quirky popularity of the annual frog-jumping contest, there are other reasons to take a scenic trip into this gold rush country for some relaxation. If golfing is part of that equation, Greenhorn Creek might be the course of choice.

We did mention relaxing. Don't get too laid back. Greenhorn is no simple track to navigate. In fact, it requires quite a bit of shotmaking. Practically every club in the bag is needed. Mistakes are frowned upon in these rolling hills, where accuracy becomes a must.

The diversity of the layout is what golfers will notice. Play a hole, then forget about it, because you won't see another one like it. Although not exceedingly long (yardage runs from 6,749 at the tips to 4,882 for the ladies), it can play much tougher.

There are more layup holes than some golfers may like. The driver must stay in the bag at some locations. When in doubt, go for accuracy. Lost balls can become a habitual habit on some of the tight, demanding fairways.

"I liked the way there were no cookie-cutter holes, everything was a little different," said Chris Traina, a Sacramento golfer on an overnight trip. "The course is not unfair at all. There are places that look wide open and other spots where it was tight. You have to make shots out here."

Greenhorn Creek, conveniently located a few miles off Highway 4, which turns into Highway 49 at Angels Camp, has been around since 1996. Word has it that course designer Don Boos was more concerned with the housing project than the course, which suffered from irrigation and drainage problems.

To make the course more playable, the Greenhorn braintrust decided to bring in highly regarded Robert Trent Jones, Jr. for the redesign. No sweat. Jones had been through this same process about 200 times in 27 states and 9 countries.

It took 10 months and cost $2.5 million for the facelift. Jones and his redesign team completely rebuilt four holes (Nos. 2, 3, 6, 24) and four greens. They also redid the green perimeters of 10 holes, plus more than 50 bunkers were added or redone.

It definitely came out looking much different. Most people would also say it's much improved. "We remodeled about half the holes and I'd say it turned out very well," Jones said. "It is a huge improvement in terms of playability and shot value. "It's a lovely site. It's got gold rush written all over it."

There is no doubting the beauty of Greenhorn. Resting at 1,500 feet elevation, the course meanders through a hilly terrain with plenty of mature oaks for character. There are striking views of the Sierra foothills. Like a peaceful round with lots of ambiance? You've come to the right place.

"This course has always had terrific routing," said Bob Trinchero, Greenhorn's Director of Golf. "All of the holes have character. What Jones brought to it, besides his name, was a refinement. He increased the course's playability."

This is a first class resort in many ways. There are 30 practice stalls, a huge 1,700-foot lodge, fine dining, club cleaning and cottages to rent for a peaceful stay. And if there is a non-golfer in the group, try touring the historic gold rush towns; wineries; horseback riding; fly fishing; plus fine boutiques.

But for now, forget about other pursuits, you're here for golf.

Many golfers will like this scorecard, which has five par-5s and five par-3s. The par-5s are not overly difficult when played from the blue tees, with four of them measuring less than 500 yards. However, do not be fooled into thinking every par-5 has an eagle opportunity. Get greedy and pay the price.

Some of the par-4s provide the severest test. A tough hole arrives at No. 5, which seems quite harmless at 368 yards (all yardage from the blue tees, the second longest). But it just happens to be the course's No. 1 handicap. This tricky hole requires a tee shot down the left side of a sloping fairway to avoid a large oak and the historic Chinese oven. Water around the green, which has all new bunkering, enhances the second shot's degree of difficulty.

After getting past that hole, do not relax. The par-3 sixth hole (175 yards) also is challenging, the third toughest on the course. It is one most golfers like, featuring a long, peninsula green. Avoid the water and the mallard ducks and you're fine.

A true risk-reward hole comes at No. 9 (473 yards), the third par-5 on the front side. Fairway bunkers down the left side increase the difficulty on this dogleg right hole. It takes three good shots to reach the green, which is well bunkered.

The 11th is a terrific par-4 (425 yards) that requires extreme accuracy. The drive must fly over a giant oak on the right side. What's left is a long iron to the green, which is guarded by more menacing trees.

The scenic 13th hole is the one every remembers at Greenhorn. Take a minute or two for the view, it's gorgeous. It has an elevated tee, plus a panoramic look at the foothills, including New Melones Reservoir far in the distance. Don't get too distracted, a pond makes this par-3 (136 yards) more difficult. Careful on the club selection. Mis-clubbing will cost you dearly.

Greenhorn Creek is a nice track when it opened and has only gotten better with the Jones touch. Played from the back tees it can be a major challenge to the low handicapper. Mid-range golfers will find it the same way from the blue tees.

Although like many Northern California courses, it suffers in the summer due to hot weather, but usually the conditions are first rate. The fairways are well maintained. The suggestion here is stay on them as much as possible because the rough can be brutal. The greens are typically in fine shape, running at a moderate speed most golfers will fine challenging.

Green fees are $55 (with cart) during the week and hike to $70 Friday through Sunday. This is also a course that would be a nice walk (subtract $15 from previous fees).

LODGING - This location is ideal for an overnight stay. Considering the charming surrounding area, the more days, the better. A one-night stay would be quite adequate to play Greenhorn Creek on two occasions, or play it once and try nearby Saddle Creek, another top-flight course.

Greenhorn has sizable cottages for rent. The two-bedroom one was surprisingly large. Both bedrooms had huge king-size beds, television and separate bathroom with sunken tub and shower. One bedroom also had a fireplace.

There is also a larger fireplace in the open family room, which has comfortable furniture for lounging or TV watching. The kitchen sits off the family room and is large and well stocked with all the necessities.

The cottages have a deck in the front and in the back, many of them with a view of the golf course. For nearby activity, there are two pools, tennis courts, plus a newly built fitness center.

"The two-bedroom cottages would be great for two families or a group of buddies," Traina said.

Stay-and-Play deals are available all year, with the peak season being May through October. Rates vary, according to season.

DINING - If the choice is staying on the Greenhorn grounds instead of heading to nearby Angels Camp, you won't be disappointed. The CAMPS restaurant, located in the lodge, offers a spectacular view of the 18th green and surrounding area. It's a good place to be at sunset. Another reason for a visit: the food is good and the service people are both friendly and attentive.

The menu is traditional California cuisine, providing a good variety of beef, chicken, pasta and some specialty dishes. The beef is a good choice. A Tuesday Italian buffet is quite popular, typically packing the dining room with local residents.

If dinner plans don't include CAMPS, the lodge is still worth a visit. The unique architecture includes two stately fireplaces. A drink on the veranda is also a nice way to conclude a day. 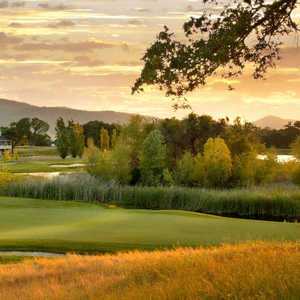 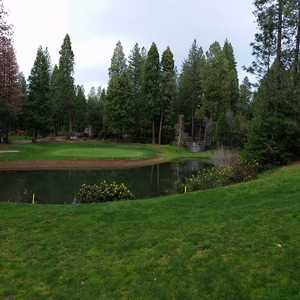 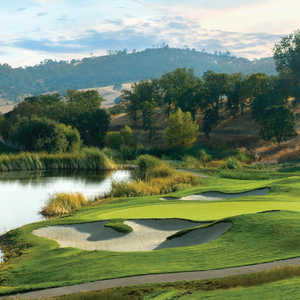