March forward to the General Old Golf Course in Riverside

RIVERSIDE, Calif. -- Golf requires soldiering for many, though the idiom takes on a more literal interpretation at the General Old Golf Course.

General Old G.C. was initially constructed as a nine-hole, private military course in the early 1950s.
«

(based on 2 reviews)
See all reviews | Submit your rating
16700 Village West Drive
Reserve Base, California 92518

Initially constructed as a nine-hole, private military course in the early 1950s (a latter nine was added in the mid-50s), a march across these grounds was limited to military personnel until 1996, when the adjacent March Air Force Base was designated under reserve command.

Yet the historic vestiges remain in myriad forms. Visitors should take a few moments to explore the recently remodeled clubhouse, where General Old's rich backdrop is most notably recalled by images and artifacts from celebrity tournaments hosted by Bob Hope from the 1960s and beyond.

More active homage segues to the course: The 524-yard, par-5 first that's plaqued as "The Bob Hope Hole" begins a unique, four-hour deployment of a round that projects sights and sounds echoing a soldier's senses.

"There are two things you'll hear out there," said Sue Cloonan, general manager at General Old. "One is the cemetery next door and the other is the shooting range behind us."

Combined with the occasional sight of a massive C-17 Globemaster III flying troops to and from Afghanistan, the reports of gunfire (somber as they are for a funeral) don't detract from the experience or distract the lining of a 5-foot putt. Rather, they serve as reminders of how fortunate players are to be enjoying the sport and a day amid the sun, mountains and green grass.

Don't be dissuaded by the "Old" in the course's moniker. Though the grounds tend to bump along on occasion and most boxes are in need of leveling, the kindly priced track presents no shortage of attack on the wayward striker.

"There are some holes where you can't just go hit driver," said Kiki Garcia, head professional at General Old. "It's not always just stepping up and hitting it; you've got to be smart and pick a spot on a certain side of a fairway. There's a mental aspect to these old-style courses."

"Old trees, small greens, a lot of doglegs and elevated fairways," Garcia said. "The big trees offer a lot of character. And you can't always cut the corner because the trees are so big."

The putting surfaces are surprisingly exceptional. When met: enjoy an excellent acceptance of high irons and very true roll. When missed: Fear not; green surrounds are generally benign and getting up and down for par is readily in play.

"No. 4 is one of the hardest holes at about 440 yards from the back tees," Garcia said. "You've got to hit it at least 240 yards to get to the top of the knoll to be able to see the green on your second shot."

The ninth is a tough, 400-yard, tree-lined par 4, followed by the monster 434-yard 10th with mirrored tree-lining.

Study is required on the sneaky 15th, and newcomers are advised to drive up toward the elevated green before striking a short approach.

"It's a good local course for us," Jeannie Morris of Riverside said. "The conditions of the greens are terrific, and they all run consistently."

Just because this General is old, don't assume he's a pushover. Tracking at 6,800 yards from the tips and presenting a host of sneaky doglegs, visitors are likely to re-enlist, especially with rates that go as low as $29 for the general public. Retired and active military members receive weeklong discounts (approximately 25 percent off).

A full, grass practice facility is available, as are individual or group instruction to players of all levels. The clubhouse artifacts are worthy of exploration, and the Aviator Grill is a fine spot for breakfast, lunch or to enjoy a beverage at the new full-service bar. 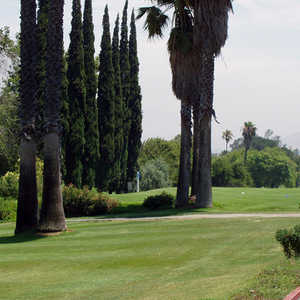