FOLSOM, CA -- Not a long-time country music fan? Then you probably do not recall the ballad Johnny Cash sang in 1968, the "Folsom Prison Blues."

Cash spent some time behind bars in Folsom, which was quite a different place nearly 35 years ago. Even if the reference was nothing to brag about, it did provide this once tiny city on the outskirts of Sacramento with an identity.

Famous mostly for its prison, the town has come under major changes over the past decade. High-tech development has spread quickly across the once barren fields and piles of mining tailings surrounding Folsom.

These days, Folsom is like many former sleepy cities in Northern California. It has been awakened, never to return to its sparsely populated, serene past.

Showing more signs of progress, it also has a golf course. This one has no peer. To the dismay of many golfers, Folsom had no course prior to Empire Ranch Golf Club opening this spring.

Looking to book a tee time at the Sacramento area's newest golf course? Good luck. Right now it seems like everyone wants to see what the new kid on the block has to offer.

It's not like the Sacramento area needed another golf course. In fact, many people would consider it bulging at the seams with some courses struggling to stay afloat financially. Considering the various discounts, it certainly has become a buyer's market in recent years.

Yet, Empire Ranch slid into the marketplace as a perfect fit. The golfing choices off the Interstate 80 corridor from Davis to Auburn are numerous. The opposite is true traveling Highway 50, east of Sunrise Boulevard.

Don't think Empire Ranch general manager Kevin Williams doesn't understand the significance. He gladly made the shift from one ClubCorp-run golf course to another, leaving the security of being head pro at Turkey Creek in Lincoln.

"We have the best spot in the entire market right now," Williams said. "There is just so much competition with Twelve Bridges, Turkey Creek, Diamond Oaks, Woodcreek, Whitney Oaks and Lincoln Hills. You could hit a driver from one course to another, that's how close those courses are to each other."

That would require one hefty drive, but the point is valid. Empire Ranch literally has no competition. The closest public course is El Dorado Hills, which is being considered for closure.

No doubt golfers from outside the area will eventually stop showing up in huge numbers at Empire Ranch. Still, the course, located at the base of the foothills off East Natomas Street, enjoys a build-in market.

The Empire Ranch housing development has 4,000 homes planned as the trend continues. Building a golf course around a housing community has become a realtor's best ally.

Empire Ranch is enjoying its status as new kid on the block. Tee times require advanced planning, which comes as no surprise to Woodcreek Golf Club head pro Rob Frederick, whose course also had a similar honeymoon period seven years ago.

"There is nothing out there, they will certainly be enjoying this for a while," Frederick said. "Folsom was starving for a public course."

Courses like Woodcreek were accustomed to regular visits from Folsom residents, some of them even becoming members. That trend will likely change. Empire Ranch will have no problem filling its membership.

"This is close proximity for me, I'll probably be calling it my home course," said Jason Green of El Dorado Hills, who played Empire Ranch in its opening week.

For many golfers, this will be a friendly home course, which is to be expected when Brad Bell has a hand in the project. A Sacramento golf architect, Bell previously designed Teal Bend, Turkey Creek, Coyote Moon in Truckee and helped with the Apple Mountain redesign.

Always keeping the average golfer in mind, Bell has done it again at Empire Ranch. The fairways are rather generous and the yardage is modest by today's standards.

The back tees measure 6,668 yards, while the blues go a mere 6,056 yards. Many golfers probably wish there was something in between on the par-71 layout.

There are few trees on the course and the wide-open spaces will make for some windy rounds. Many of the greens are long and narrow. Caution should be taken on approach shots, at least until the course matures. The greens roll true, although only at a moderate speed, which should please the masses. Bunkers are prevalent throughout.

Most golfers will enjoy the backside more than the front, which is flatter and has some severely penalizing wetlands on many holes. Elevation changes are more prevalent as the course moves higher into the foothills on the back nine.

The backside offers some nice views of the Sacramento valley and features three par 3s. The one golfers will certainly remember comes at the 18th. That's right, a golf course with a finishing par-3. Of the 56 golf courses in a 45-mile radius of Sacramento, none offers a par-3 finish.

That was not in the original plans until Bell switched nines after getting involved in the project. The 18th is definitely the signature hole, an elevated tee with some distance, going 211 yards from the back tees and 191 yards from the blues. A water hazard and sand trap add to the difficulty.

"There will be some money won and lost on 18," said Chris Traina of Roseville.

Other notable holes are a short par-5 at No. 3 (472 yards) that will have some golfers getting home in two shots. Another fun hole is the 14th (par 4, 378 yards), which requires a blind tee shot over a ridge. A gorgeous view of Sacramento Valley and parts of Folsom make the hole even more enjoyable.

Another strong hole is the 15th, the last of the par-5s, going 518 yards. Like several holes, this one has a blind tee shot. Fairway bunkers make it a gamble off the tee trying to shorten the dogleg left hole.

Empire Ranch is reasonably priced, costing $40 Monday through Thursday. Of course, the rate climbs higher on the weekends, including Friday, now a weekend day according to many courses. There is no discount for walking the course.

There are reasons to plan a trip to Folsom, other than for golfing purposes. The old town district is worth spending some time at. It has many shops to peruse and offers the quaint appeal some people love. Among the choices for an overnight stay are Hilton Garden Inn, Lake Natoma Inn, Larkspur Landing and the Oakwood.

There are many suitable locations for a nice meal, whether it be lunch or dinner. A few of the hot spots are Bidwell Street Bistro, Chevy's, Applebee's Neghborhood Grill and Baja Fresh Mexican Grill. For an out of the way place for a drink, game of pool and other bar games, try the Purple Place. 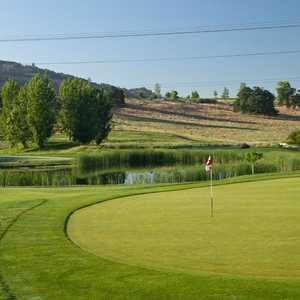 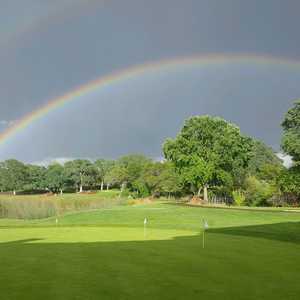 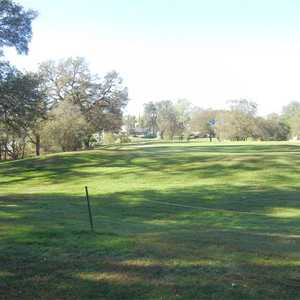