DESERT HOT SPRINGS, Calif. -- Should the Palm Springs windmills in the deep backdrop of Desert Dunes Golf Club prove silent for your day of play on these rolling grounds, then ready your pencil for a round of Quixotic scoring.

The sixth at Desert Dunes Golf Club is a short par 4, but when the wind is howling it's one of the toughest holes on the course.
«

Desert Dunes Golf Course has a unique layout that combines a traditional links design with true desert-style golf. The course winds through natural sand dunes that are accented with mature trees and an abundance of native vegetation. It offers one of the most challenging rounds in the valley with narrow fairways, dramatic elevation changes, and fast, sloped greens.

Absent of housing, the sweet solitude at Desert Dunes serves as a thesis of designer Robert Trent Jones Jr.'s ideology of natural routing. If the prevailing wind from the northwest is howling on a given day, however, be assured that spinning windmills will serve as a compass for a scorecard trending north.

On a quiet day Desert Dunes will play as a markedly "easier" track. At less than 6,900 yards from the tips with generous landing areas off the tees, sporting just two par 4s that play more than 400 yards and presenting a dearth of water -- this course is a consistent invite to the accurate.

"The course lends itself to not trying to cut corners. You better hit it down towards the center of the fairway," says Pat O'Donnell, director of golf at Desert Dunes.

But for those who belie prudence, dire consequences await.

"We don't have a typical desert course like you'd find in Arizona, where you hit it and walk out and find your ball," O'Donnell says. "Here, it's the type of desert where you can lose your ball. There's shrubbery and you don't even want to reach in there to get the ball if you can see it because of the barbs; you'd be going in there for acupuncture."

Further pain via pressure can be found on the oft-undulating greens, which combine with the desert foliage and wind potential to serve as the main course defenses. The slower speeds of these generally sizeable putting surfaces are set with intention. Otherwise, a windy day would find consistent oscillation of the ball and playing above the hole would see four-putts killing the pace of play.

Ready for the Canadian Tour

En route to claiming the Canadian Tour's "Rookie of the Year" in 2010, upstart Adam Hadwin claimed his first tour victory at the debut Desert Dunes Classic.

The season-ending tournament returns to Desert Dunes the first week of November and, save for one tee box change, the field of pros and celebrity amateurs will be facing the same layout presented to daily-rate players.

O'Donnell is hoping an influx of wind will blow down the 19-under tally authored by Hadwin before his playoff win over Richard Lee last year.

"The second hole is probably my favorite as far as trying to hit it in the right spot off the tee with the right club and trying to get an angle at the pin," O'Donnell says of Desert Dunes' longest par 4 on the front nine. "If you hit it too far right, it's drops down to the rough and there's bunkers guarding the right side.

"No. 6 (a par 4) is a little sleeper hole, it's only about 340 yards. If we do get a stronger wind it can be turned into one of the toughest holes on the golf course. Without a wind, it's a 3-iron or hybrid off the tee. Into the wind, you have to pull that driver out and it gets narrow down there."

When the course turns to the back, there is a suddenly distinct change in the look as holes 10-12 (all par 4s) abandon the open links feel of the front and feature tree-lined fairways.

"It's a great, little contrast," O'Donnell says of the turn. "Maybe some people would like to see more of that out here, but then it would take away from the desert feel."

The anticipated change comes at the 13th tee box, where a presently unused elevated view should extend the par 5 to nearly 600 yards while offering a blind drive over desert terrain that is far more pleasing to the aesthetic than it would be to the touch.

On a calm day, Desert Dunes Golf Club will prove to be one of the desert's most tranquil rounds. With excellent desert-cut routing and a host of nature sightings (bobcats, coyotes and course mascot -- the desert kit fox), this is among the most peaceful places in the region.

Avoid tough fairway bunkering and go for the 150-yard fairways poles to guide your drives. And be sure to roll some putts pre-round; these greens are slower than most in the area. 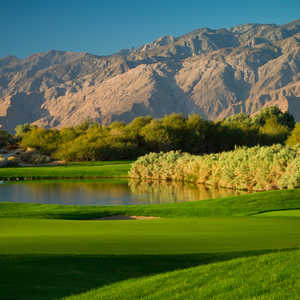 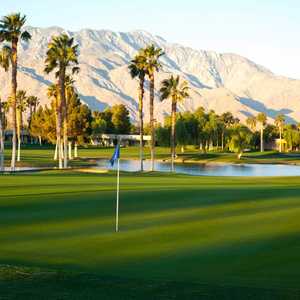