AUBURN, Calif. -- Some believe that millions, perhaps billions of dollars of gold still lays buried deep below ground in the rolling Sierra Foothills between Auburn and Grass Valley -- land that is dotted on tawny hills with majestic oaks and towering pines, small creeks, lakes, and huge granite outcroppings. Some say more than 80 percent of the Mother Lode is still in the ground.

Here, on land near the historic Gold Country route of Highway 49, within sight of Lake of the Pines, and where Angus cattle once roamed, golfers struck gold when the Edwin Fralick family purchased property in 1990 and hired Keith Foster to design DarkHorse Golf Club.

Since opening in October of 2002, DarkHorse is California's best golf course built this century.

Golf Magazine listed the 7,203-yard, par-72 course No. 85 on its Top 100 You Can Play List. Golf Digest picked it for its America's Best New Courses list and Golfweek tabbed it for America's Best Courses, 2004.

Foster's ideals, that golf should be a strategic game, are apparent here. And the owners wanted someone to work with the existing land and not change it with rambling bulldozers. Instead of going by office blueprints, Foster used the land as his office. He let the natural curves and dips dictate the routing and he was on the ground, with an on-site vision to tweak the layout. It was like they built courses in the 1920s, Foster said.

"Golf has become too Americanized," says the St. Louis-based Foster. "Too many today view golf as entertainment. Every year I go to Scotland and Ireland and play golf the way it should be -- brave the weather elements, play the ball down and finish 18 holes in two and a half to three hours. That's the way golf should be."

Foster had a rugged canvas to work with at DarkHorse. The 1,100 acres roll mightily with elevation changes of 1,500 feet to 1,700 and the layout mimics his vision of little dirt movement -- only 160,000 cubic yards were pushed. Other architects have typically moved 600,000 yards on such a site and more than a million in a valley setting.

Here, the front nine moves through meadows bordered by daring wetlands and the final nine has mountain-like elevation changes and fairways defined by thick groves of native trees. Add seven stream areas and you have a golf experience that celebrates with its natural environment.

Dodge all these problems off the tee and Foster has presented a course that rewards strategic thinking, clever risk-taking, shot-making skills and allows a fair score should you tame the efficient rolls of the contoured bent grass greens. Sixty-five sculpted bunkers, set below the grade of the greens, remind you of traditional golf and dares the golfer to be heroic or pay the price.

"It's the kind of course where you can have a good round going and if you lose concentration you can make an eight easily," said John Howard of Auburn. "I hear a lot of people comment on the excellent condition of the course and the fast greens. It is scenic, well laid out, not tricked up, but you have to be in the correct position to make pars."

"I thought it was exceptionally special," said Brad Alexander, who staged a PGA event at DarkHorse. "It was one of the best-conditioned courses we played this summer. The greens were not too hard or soft, rolled great and looked awesome."

One of the favorite holes on the front side is the par-4 No. 5, a 469-yarder, that presents clustered bunkers right, guarding a bend to the right. Long hitters just fly the bunkers, making par manageable, but a two-tiered green awaits that
slopes from back to front.

If the wind is blowing on No. 6, a par-3, 160-yarder, you might have to use a middle iron to nail one on this medium-sized green, surrounded by an amphitheater of huge oaks and bunkers.

The par-5, 544-yard No. 7 accepts a gentle draw off the tee, but then you have to contend with a wetlands down the left side that lead to a pond with the green curving and hugging it left. If the wind is blowing sideways toward the water it is a scary approach.

No. 14, is a short 312 yards, but position is crucial. Going too far left can be costly because a huge oak tree guards that side of the green, which has a big rise from front to back. However, too far right and your ball is bound for a pond.

The 184-yard par-3 16th looks manageable from the tee, but it is highly protected by bunkers. Dare to head for a sucker pin on the right and you might just miss the green and roll down a steep slope, creating a miracle recovery.

It's all downhill on the finales of 17 and 18. The penultimate hole is 453 yards of lofty carry, but three bunkers are spaced in the landing area. The 18th, a par-5 524-yarder drops 60 feet to a left-curving fairway, but a duck hook will limp woefully into a flowing stream. A drive nailed down the right side might take a big hop down the fairway, giving you a shot at the green in two. But it is heavily guarded by low wetlands before the green rises into a bowl that is bunkered big-time.

A 23,000-square foot clubhouse with "Sierra-décor" is next on the schedule with restaurant, locker rooms, learning center and other amenities.

As you finish your round at DarkHorse you will be able to see what all the fuss has been about and that years of hard work went into this California winner. Play a Keith Foster course like Haymaker in Steamboat Springs, Colorado or The Quarry in San Antonio and he might become one of your favorite architects. DarkHorse is even better. "We labored 120 days straight to get open on time," recalled PGA pro-general manager Russell Sylte. "And the golf course was booked from opening day for four months straight." The night before opening Sylte and crew were paving the parking lot.

The Northern Queen Inn has 86 rooms, eight chalets and eight cabins. The cabins are nestled in the woods. Cabin guests will enjoy a separate bedroom with a queen-sized bed, efficiency kitchen and a wood burning stove in the living room. But what distinguishes this place is the Nevada County Historical Society's train display. The Narrow Gauge Railroad was built in 1874 and the line was originally 22 miles long, beginning in Colfax and destined for Nevada City. Engine No. 5 has been featured in more than 200 movies and TV programs and was returned to Nevada County from Universal Studios in 1985. You can even ride the train.

Dining at The Northern Queen Inn

Start your day before golf at DarkHorse with breakfast at the Trolley Junction Restaurant ((530) 265-5259) and end the day with dinner. Try the Grilled Calamari Steak Strips and finish with Filet Mignon Oscar - an 8-ounce choice cut filet, bacon wrapped and char-grilled.

DarkHorse is about 50 miles from Sacramento and the once-sleepy area is now bustling with new residents -- many commuters drive every weekday to the capitol city. Legend has it that the Grass Valley area made the map when a rancher, in search of a missing cow, stubbed his toe and dislodged a large, shiny rock. It was gold. Soon after another man searching for stones to construct a chimney discovered a rich vein of gold quartz. The rest Gold Country history. 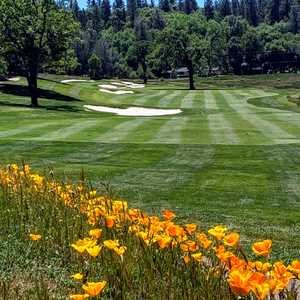 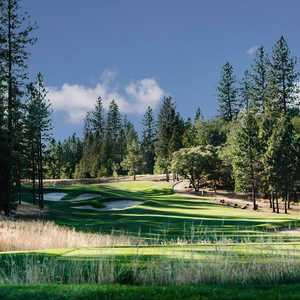 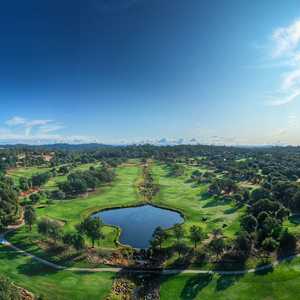