YORBA LINDA, Calif. - They've struck it rich for the second time by punching holes in a fertile and scenic piece of land in the hills above Orange County.

Black Gold Golf Club, designed by noted architect Arthur Hills and owned by the city of Yorba Linda, opened for play in November, 2001, on rolling terrain that for many years was a working oil field owned and operated by Shell Oil Company.

"Black Gold will be considered for best new public course in 2002, its year of eligibility for that award," Hills predicted of the golf course. "Of course, it is the golfer who will determine how the course will rank. This is a course that everyone, golfers of all skill levels, can enjoy and be proud of.

"The elevation changes played a big part in the design of the golf course. The Black Gold site is dramatic. Players of all abilities will find Black Gold a composition of beauty, challenge and strategic options."

A member of the Ohio Golf Hall of Fame, he has created more than 150 golf courses, including such award-winners as the Mountain Course at Bighorn Golf Club in Palm Desert (site of Tiger Woods' made-for-television "Battle of Bighorn") and the Ocean Course at Half Moon Bay Golf Club.

In addition, Hills has been selected to renovate some of America's classic courses, including Oakmont Country Club in Oakmont, Pa., the Inverness Club in Toledo, Ohio, Congressional Country Club in Bethesda, Md., and Oakland Hills Country Club in Birmingham, Mich., all of which have hosted the U.S. Open and the PGA Championship.

Black Gold, operated by Kemper Sports Management of Northbrook, Ill., is destined to become another jewel in his crown.

"It's everything you would expect of an Arthur Hills design," said Eric Lohman, Director of Golf at Black Gold, who moved to Yorba Linda from Cimarron Country Club in Palm Springs. "It's subtle but traditional. It's a very visual course but it doesn't overwhelm you."

"I'm impressed with so many things here. The location is near a large population area but you feel like you are away from it all. It's built on the side of the hill but there are only a couple of drastically uphill or downhill holes. And the views are breathtaking."

On a clear day, golfers can see the Santa Catalina Island out in the Pacific Ocean, which sparkles some 20 miles in the distance, with the third and 12th tees providing the best vantage points on the course.

Disneyland also is visible in the middle of the Orange County sprawl, which stretches out below the course, and the coastline is visible from roughly Long Beach to Newport Beach.

The Richard M. Nixon Presidential Library and Birthplace in Yorba Linda is less than a mile from the course, which is bordered to the north by Chino Hills State Park.

But the course could meet any test, even in the middle of a wasteland.

"Arthur Hills has not designated one hole as the signature hole, possibly because there are several of them that could be considered," Lohman said. "It might be No. 18 because of the waterfall, but there are just so many to choose from."

"The golf course is built on 219 acres and Arthur Hills used them so well that there aren't any parallel fairways. And it's a rare course where none of the 18 holes are similar, but that's the way he built this one."

Hills also took a page from the classic Cypress Point Golf Club at Pebble Beach by creating back-to-back par threes on the front side, Nos. 7 and 8.

In another interesting quirk, the back nine starts with another par three, which makes three short ones in a span of four holes, separated only by the 410-yard ninth.

"The great thing is, all three of those par-three holes are different," Lohman said. "The first one is uphill, the second calls for a tee shot over a ravine and the third is downhill and brings into play the lake in front of the clubhouse. And the distances are different on all three. Actually, it's a great break in the middle of the round."

The 220-yard eighth hole is probably the best of the three holes and plays even longer than the yardage because the demanding shot must be hit into the prevailing wind. The green runs diagonally from left to right, making the back right pin position particularly difficult.

"It's such a dramatic hole," Lohman said. "There's a natural water feature and so much elevation change with the gully, but actually the tee and green are just about level with each other.”

"Hills gives you a bailout area on the left, but if you bring it in from the right and leave it a bit short, you have a drastic uphill pitch shot."

Lohman says the second hole is the sleeper of the course. It's a short par four, 299 yards from the back tees, but three deep fairway bunkers come into play off the tee and the tiered green is a three-putt waiting to happen.

"The green on No. 2 is reachable for some players at 299 yards even though it plays longer than the yardage, but there is plenty of trouble on that hole," Lohman said. "It's deceiving because it's a difficult driving hole because of the bunkers and thick rough."

"It's tough to reach the elevated green with your second shot because it's so much uphill you might have to hit two more clubs than the yardage indicates. It's a hole people might tend to overlook, but that can easily lead to a bogey or a double."

But if the golfers pays attention, he can get off to a comfortable start on the first four holes of the course before confronting No. 5, a 449-yard par four, the No. 1 handicap hole. A steep hill cuts into the fairway in the driving area on the left side of the hole which plays slightly uphill.

"The best way to play the hole is up the right side with a slight fade to avoid the fairway bunker," Lohman said. "There's limited space on the left and the angle into the green is better on the right, too. There's a natural amphitheater that frames the green nicely and there is a bailout area to the right. It's better to be long, especially if the pin is back. It's a long, narrow green, and it's tough to get up and down if you come up short.”

"I think this is going to be rated as one of the toughest par fours in Orange County."

The first four holes of the back nine offer a dramatic contrast, with active oil wells operating on one side and Chino Hills State Park on the other. The tee box on the 375-yard 12th hole is at the highest point of any golf course in Orange County, but the most spectacular hole in that stretch is undoubtedly the 513-yard 13th.

It's a roller-coaster par five that is the tightest on the course, which has ample driving areas on most other holes. If you hit your tee shot over the first hill on No. 13 , you might have a chance to go for the green in two. But the cavernous bunker on the right is bigger than the green and a environmentally-sensitive area narrows the fairway near the green on the left.

"That's an awesome hole, probably my favorite on the course," Lohman said. "It's a prototypical risk-reward par five. It can play short but it's very tight and the environmental hazard comes into play on the left side when you get close to the green. You have to know where the trouble is because you can't see it off the tee. That's where the GPS (Global Positioning System) screen in your cart comes in handy. You can hit driver off the tee, but you better hit it straight. The smart play is to lay up. That hole sits in its own little canyon and it's very scenic."

Hills saved plenty for the finish.

The 18th hole is another up-and-down affair, a 535-yard three-shot par five for all but the longest hitters. Play the tee shot up the right side and lay up to the left to avoid hitting your approach shot over the lake. And don't get mesmerized gazing at the tiered waterfall in front of the clubhouse.

"You can hit driver there but I think the best play is a fairway wood up the right side," Lohman said. "If you go with driver and really crank one, maybe you can go for the green, but it's a very difficult second shot. But you don't have to make that decision until after your tee shot. Most of the time you will lay up and just maybe have a wedge left to the green."

Black Gold also has the before and after covered, with a fully-lighted grass driving range and a 20,000-square foot all-service clubhouse that has banquet facilities for up to 200 people.

The course in conveniently located off the 57 and 91 freeways, making it easily accessible from Los Angeles and Riverside counties.

When you exit the freeway, head for the hills and discover Black Gold Golf Club. 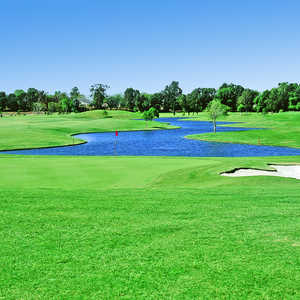 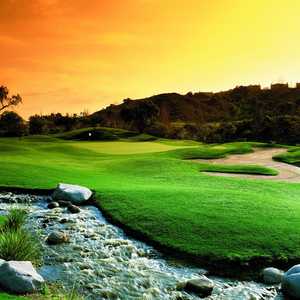