BETHEL ISLAND, Calif. - In most places in the world an island is isolated not only from populations but from other land. Of course, there are major exceptions and it looks like Bethel Island is one of them. After crossing over a canal in eastern Contra Costa County you'll soon spot a sign that says Bethel Island.

A little further on, travel over another canal and you'll come to a vast, flat land, part of the great Central California Delta. Out in the middle of this sits Bethel Island Club with its golf course.

If you're not put off by the flatness, or the Bermuda Grass which is mostly turning yellow in the winter, Bethel Island Club has some nice amenities. First of all, it's one of the few places which offers a chipping to putting green with a sand trap thrown in for good measure.

It also offers a driving range off the grass. The mid-week prices are low ($15) and the weekend is only $22.

My playing buddy and I partnered up with a great semi-retired, middle-aged couple from Oregon and since we were all walking it worked out pretty well. There were a few things about the course which made it more difficult than it needed to be.

As it often happens, I beat myself, having achieved my lowest score on record the previous day...this day seem doomed from the beginning.

The 1st hole is a 341-yard, par 4 straight-away with lots of room. Two things right away. The fairway will often bounce your ball with the help of the Bermuda grass so a misshot can put you out of bounds through or over the fence very quickly.

The greens are tight, close, steep, and fast. Very difficult to figure. There's a smidgen of pines and coast oak around the greens with hard packed sand traps laid out miscellaneously.

The 2nd hole is a 542-yard, par 5 with rough coming into play on the right. Mark the direction of your ball especially when you tee off. Balls are easy to lose track of in the yellowing Bermuda grass fields. Here I spot a couple of denuded maple trees. The green slants steeply back towards the tee.

As I listened to the notes I took for this review I realized that they were deadly, recounting as they did hole after hole which were straight-away with greens tilted to the tee. I might as well have been playing on the prairie. I'll spare you the repetition.

My golf buddy and I began to realize as we entered the back nine chasing this "middle-aged" couple that they were very good. The husband could drive the ball forever and the wife made some unbelievable putts.

On the 11th hole a killdeer called to us as it scurried away. The nice wife from Oregon described the bird to me as the bird "that will lead you away from her nest by pretending that she's hurt."

At home, I looked the bird up. There was no mention of its skill in leading those who would harm her young away from the nest, but its scientific name is Charadrius vociferous. Ummm.

I took the opportunity to ask the lady what their golfing situation was in Oregon. She said at their club they paid $100 a month for the two of them. I asked her how much they got to play for that amount.

She said as much as they wanted to. I asked how often, then, did they actually play. She casually replied, "Why daily, of course." Of course. Practice, practice, practice.

With a few exceptions I have enjoyed playing golf this winter and feel fortunate that I live in an area where it's possible to play year-round. Truth is, even when it rains, we usually continue to play because in our area it's a rare rainfall that lasts longer than 20 minutes.

There were a few things about the course which made it more difficult than it needed to be.

As I moved to the back nine and my game began to settle down a little bit, I realized that what with the overcast sky, the coolness, and the sameness there was a sense of drudgery about this course which I'd never felt before.

It must be difficult to overcome the sameness which is the detriment of a flat course. You can haul in more dirt, but you can't haul in hills. It's different when your course is built on a landfill like Shoreline where they were creating the land out of whole cloth. They were in fact building small hills and did a pretty good job.

About 40 miles due east of Bethel Island, out there in the middle of the great San Joaquin Valley, there's a little town called Hughson where my uncle Cleo grew up. Cleo became 3rd in the U.S. in roping and tying cattle on the rodeo circuit probably sometime in the 1930s.

Now in his late-80s, he still works his ranch. He hires young cowboys who remind me of some golfers we saw late in the day whooping it up on their golf carts out at Bethel Island having a good time during the Christmas vacation.

What in the end made this day a good one, in spite of the course and the way I played it...were the people I was able to play with. We had a good time. That isn't such a great recommendation, but perhaps in the spring when the grasses turn back to green, Bethel Island will once again become a suitable, if very flat place, to play golf. 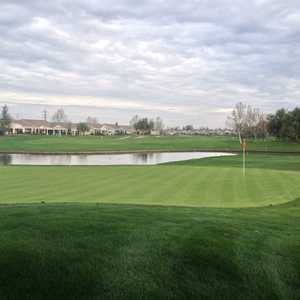 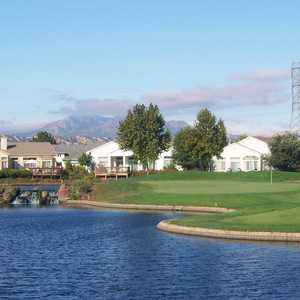 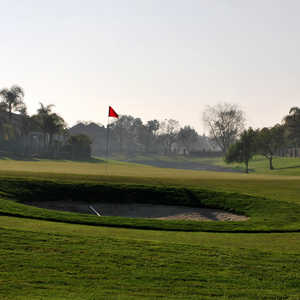